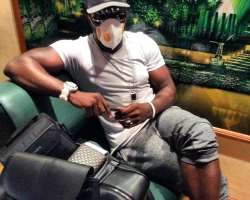 Disease of the moment, Ebola, is definitely making many people be on their toes. Almost everyone is talking about it and various governments in the West Africa region are doing everything possible to ensure that their countries are safe.

Few days ago, a Liberian man was said to have contracted the deadly disease and was quarantined in a Lagos hospital, but unfortunately, he lost his life and this has raised more fears among Nigerians, especially Lagosians.

Jim Iyke, a top Nollywood actor, announced few hours ago that he is leaving Liberia, where it is reported that the disease is spreading. According to him, he is scare of the disease and would not risk contracting it because of the business he went there for.

'Monrovia (Liberian capital), unfinished business; leaving tonight. Not ashamed to admit this thing (Ebola) scares the Jesus out of me,' he said.