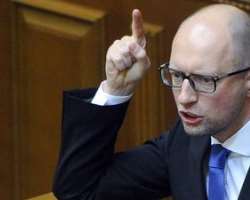 Arseny Yatsenyuk is shown during an address to Ukraine's Parliament on Thursday, during which he announced his resignation as prime minister. (Andrew Kravchenko / AFP/Getty Images)

Collapse of Ukraine's government takes many in Kiev by surprise

Ad by safeweb | Close This Ad
The Ukrainian government collapsed and the popular prime minister resigned Thursday, highlighting the political gridlock gripping the country struggling with a pro-Russia insurgency, a hostile neighbor and one of the weakest economies in Europe.

The resignation of Prime Minister Arseny Yatsenyuk, considered a rising star in Ukrainian politics, came as U.S. officials cited evidence they said showed that Russia was firing artillery across the border into Ukrainian territory.

A pro-Europe party led by former heavyweight boxing champion Vitali Klitschko, who is currently mayor of Kiev, and a far-right party with a few seats withdrew from the governing coalition with the Fatherland party, causing it to fall.

In an emotional speech announcing his resignation, Yatsenyuk told lawmakers that legislative gridlock was hampering the country in areas that included the war effort against separatists in the east and economic stabilization.

Politicians have 30 days to try to form a new government; if they fail, President Petro Poroshenko is likely to call elections for the fall. Such elections would probably result in major gains for pro-Europe parties and marginalize pro-Russia factions, which are highly unpopular because of Moscow's annexation of Ukraine's Crimean region in March and what many Ukrainians view as Russia's support for the separatists.

In the interim, Cabinet members named Deputy Prime Minister Volodymyr Groysman acting prime minister. At 36 and with no party affiliation, Groysman is seen as an appealing alternative. He has served as the mayor of the western city of Vinnytsia, where Poroshenko grew up, and was named the government's point person on the downing of Malaysia Airlines Flight 17 over eastern Ukraine last week.

Despite the parliament's dysfunction, the 40-year-old Yatsenyuk had repeatedly said he wouldn't resign.

I announce my resignation in connection with the collapse of the coalition and the blocking of government initiatives. – Ukrainian Prime Minister Arseny Yatsenyuk

“It was an emotional move but also a rational move,” said Igor Popov, a political scientist at the Politika Analytical Center in Kiev. “Yatsenyuk realized that with the economic problems and the parliament problems, it was going to get worse for him and he would get more blame, so he made this move for his political future.”

Yatsenyuk met with President Obama in a high-profile White House visit during the Crimean crisis in March, and has drawn domestic support from those who laud his populist image.

Many Ukrainians resent the fact that the parliament still includes pro-Russia members who stayed on after the ouster of President Viktor Yanukovich.

During his campaign to replace Yanukovich, Poroshenko pledged to move up parliamentary elections, which are not scheduled until 2017.

The perception of disarray is likely to hurt the country at a time when leaders are trying to gain Western support for their fight against Russian President Vladimir Putin.

Thursday's moves also highlight a fault line within the Ukrainian political culture over the separatist conflict. The Fatherland party and Poroshenko have been divided over the approach to the conflict, with party leaders criticizing the president for not taking a sufficiently hard line against the separatists.

After the collapse of the government, Poroshenko reiterated his desire for a new parliament and appealed for national unity.

“All public opinion polls as well as direct communication with people demonstrate that the society wants a complete reload of state power,” he said in a statement. “I call on all people's deputies to work responsibly in the parliament and to realize that Ukraine is currently struggling for its sovereignty, territorial integrity, existence of our state and the future of the people of Ukraine.”

Despite hope that tension in eastern Ukraine would subside after the Malaysian jetliner disaster, the conflict has intensified. On Wednesday, two Ukrainian fighter jets were downed, possibly by separatists, and on Thursday a State Department spokeswoman said U.S. intelligence agencies had evidence that Russia was firing artillery at Ukrainian military positions.

Also Thursday, European Union ambassadors meeting in Brussels agreed to add more names and entities to the 72 from Russia already subject to visa bans and asset freezes. They said they would meet again Friday.

The talks did not lead to agreement on tougher measures favored by the U.S., such as imposing sanctions on entire sectors of the Russian economy, but the action taken Thursday essentially means that Putin's allies can now be targeted.

Still, the ambassadors' inability to agree on tougher measures points up the difficulty in finding consensus among the 28 nations of the EU, and underlines the divisions among them over how far to go in punishing Moscow.