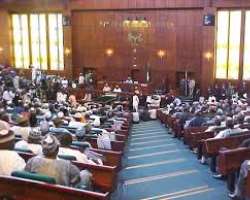 The factional PDP lawmakers in the Edo State House of Assembly gained entrance into the Anthony Enahoro Assembly Complex Monday morning after they broke the locks of the door, under the watchful eyes of more than 100 fully armed policemen at the gate.

The lawmakers, who allegedly arrived at the assembly as early as 6:30 a.m., defied the early morning shower and held plenary, with the suspended deputy speaker, Festus Ebea, presiding as speaker.

Addressing journalists after the brief 'plenary', the Sergeant At Arms, said the lawmakers had resolved that the renovation in the Assembly Complex was illegal, adding “it did not go through due process. It did not pass through my table, as the Chairman of the Committee on Tenders Board.”

He also stated that the Speaker, Uyi Igbe, and other principal officers of the House, whom they had suspended, should be prevented from making withdrawals from the Assembly's account.

Among other things, the factional legislators resolved that Governor Adams Oshiomhole should immediately pay the outstanding entitlements of the recalled teachers, just as they instructed the 24 local government council chairmen to forward their receipts of cash disbursements to the House.

They lawmakers who sat for for about 30 minutes after praying, said the “second sitting was to ratify all resolutions earlier made outside.”

They also resolved that all accounts of the Assembly be frozen. To that end, they resolved that letters to that effect be made to the state governor and the CBN.  The lawmakers after adjourning plenary till tomorrow, moved to their individual offices where they addressed selected journalists.

Meanwhile, APC lawmakers also rose from their sitting at Government House and called on the United Nations and other world bodies to call law enforcement agencies backing the PDP lawmakers to order to forestall a breakdown of law and order in Edo State.

The crisis rocking the Edo State House of Assembly is already taking it toll on residents of the City of Benin, with many calling for the closure of the Anthony Enahoro Assembly complex for the city to have peace.

The decision by the PDP-member lawmakers to hold plenary at the Assembly this morning attracted heavy presence of fully armed security operatives everywhere around the King's square, causing confusion and hardship for the residents.

It was gathered that some youths attempted to attack the Assembly complex probably with the intention of causing mischief or mayhem, but were repelled by security agents, necessitating the cordoning off of every road leading to the King's Square.

The incident resulted in unprecedented traffic jam. Residents commuting from the King's Square to Sapele Road (by Agip), had to pay N200 as against the usual N50 charged by commuter bus operators due to the traffic gridlock.

One of the commuters, Osarumwense Ighodarho who spoke to P.M.NEWS , lamented inconveniences caused by the lawmakers.

“Just look at me, it's close to10 a.m. and I am still at Ring Road, with no hope of getting a bus, whereas I am supposed to resume work by 8 a.m. We are not the cause of the lawmakers' misunderstanding, so why must we be the ones to suffer for it? We didn't vote for them to create more trouble for us. If they are tired of making laws, they should resign and stop causing us trouble. To me, they have become more of a nuisance and irresponsible than people's representatives,” she said.