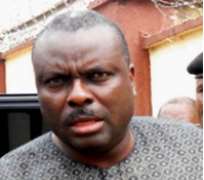 9th November 2009, Proceedings began at 10:35am with the Prosecution informing the Court that the expected ruling on Friday 6th November 2009 at the Asaba Court where Ibori has filed for a dismissal of the EFCC charges against him did not happen. The judge, Judge Hardy acknowledged this and said he got an affidavit through the Defence lawyers from the trial judge in Nigeria where the later affirmed that his ruling was ready but he was unable to deliver it last Friday because an unexpected issue had come up. The Asaba court would now deliver its ruling on this interlocutory matter on 23rd November 2009.

The Prosecution argued that the London trial of Ibori's associates should proceed. It said that the prosecution's Opening Notes are ready and that the court should move to empanel a Jury by Monday 16th November. The Defence countered that Ibori appeared in court in Asaba on Friday 6th November but that the judge wasn't able to rule on the motion for dismissal. Defence then argued that it would be wrong to proceed with the London case until Ibori's case in Nigeria is determined. Mr Trollope for the Defence further said that it would be unlawful for the three women (Christine Ibori-Ibie, Ibori's sister; Adebimpe Pogoson, his secretary; and Udoamaka Onuigbo-Okoronkwo,his mistress) accused of money laundering on behalf of Mr Ibori to be tried until it is proven in Nigeria that Ibori did indeed steal those monies.

Judge Hardy reiterated that the Crown's position is that the Asaba's case has no full bearing on the money laundering case in London. Judge Hardy then sounded out the Defence that the dismissal of charges of stealing against Ibori would mean that the Defence would ask for the case in London to be struck out. He then added that if on the other hand, Ibori's demand for a dismissal is thrown out and he is asked to stand trial for stealing, then the Defence would move that the London trial be stayed until Ibori's trial is concluded however long that might take. The Defence responded in the affirmative. It added that if the judge empanels a Jury, that Jury would only be sent home or put on hold to await the resolution of matters in Nigerian courts.

The Prosecution submitted that the right of appeal is available to Ibori's Defence team and to the EFCC and so the London trial should proceed. It maintained that the Asaba case could go on being postponed indeterminably. The prosecution also added that the Defence and EFCC had chosen not to use the fact (contained in their own bundle) that Ibori's funds were stolen money, and maintained that this therefore should not stall the London trial. The Prosecution was very adamant that the Nigerian case against Ibori is not a determinant in the London case and that the evidence does not affect same. The Prosecution also reminded the Judge that just last Wednesday, the Court of Appeal in London denied the Defence appeal as Lord Justice Hughes said that “it is high time this case goes to trial.”

In the end, Judge Hardy (who unconfirmed report say is due to retire from the Bench in December 2009) ruled that to be fair to the three Defendants and for the London trial to be seen as fair, he was happy to adjourn the case again until 24th November 2009 to enable first the ruling in Asaba on the 23rd of November.

The triumphant exchange of satisfied grins amongst the Ibori crowd was in-concealable.