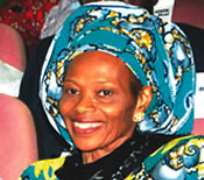 A former Minister of Information and Communications, Prof. Dora Akunyili, is not dead, it was learnt on Friday.

A statement pasted on her Facebook page by her Media Adviser, Isaac Umunna, at about 8:07pm, urged members of the public to disregard the rumour about her purported death.

Umunna said, 'Please disregard the rumour about Prof. Dora Akunyili's purported death. It is the same baseless rumour circulated by some people for reasons best known to them. They have been at this for about four weeks now and are likely to continue, since they apparently derive pleasure from doing so.

'The situation, as confirmed by former Anambra State Governor, Peter Obi, who visited Akunyili in the hospital earlier this week, is that she is getting better.'

The former minister, who is a delegate to the ongoing National Conference, had reportedly been flown Abroad on May 10, 2014 for medical treatment.