World Cup: I believe in my players, says Keshi 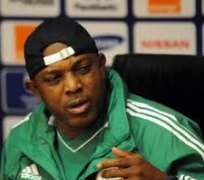 Head coach of the Su­per Eagles, Stephen Keshi has declared his total confidence in his players, going beyond the round of 16 at the FIFA 2014 World Cup in Brazil.

Nigeria Football Federation (NFF), Assistant Director of Communications, Ademola Olajire at the Cobham Ho­tel base of the Super Eagles quoted Keshi as saying, there would have been no reason for the team to have gone through the qualifying stage and prepar­ing for the World Cup if he was not confident that the players can deliver on their words.

'We stand as good a chance as any other team in the finals. We will give it our best shot.'

As a player, Keshi started with the junior squad but only narrowly missed being in the Christian Chukwu-led team that won the 1980 Africa Cup of Nations. He became the team's youngest Captain three years later, and led the squad to win the African Nations Cup on away soil for the first time and to qualify for the FIFA World Cup for the first time.

As coach, he led the team to win the African Nations Cup on away soil (South Africa 2013) reached the FIFA World Cup finals.

Less than 19 months after tak­ing over the team at a low ebb (failing to qualify for the 2012 Africa Cup of Nations), Keshi has steered Nigeria to becom­ing Africa's brightest prospect going to the FIFA World Cup, as attested to recently by Zam­bian legend, Kalusha Bwalya and Togo superstar Emmanuel