PDP to APC: Stop denigrating office of the president 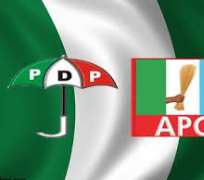 The Peoples Democratic Party (PDP) on Monday passed a pungent message to the rival All Progressives Congress (APC), urging it to stop denigrating the office of the president.

According to the party, after carefully taking stock of sustained insults, vituperations, lies and unending schemes by the APC against the office and person of President Goodluck Jonathan and alerted that they all part of the well laid-out plot to cause confusion and ultimately truncate the nation's democracy.

In a statement by its National Publicity Secretary, Olisa Metuh, the party said, 'In continuously hauling insults against a democratically elected President upon whose shoulders lies the sacred mandate freely given by the Nigerian people, the APC is directly insulting Nigerians and showing their disdain for the institution of democracy. This further confirms the APC's Janjaweed ideology against the nation.'

'The National Chairman and the National Working Committee of the PDP find its very disturbing that the APC leadership made up of elderly persons who ordinary should have a sense of self respect and decorum, could condescend so low and resort to the use of uncouth language against the office and person of the President out of sheer frustration, bitterness and envy.

'They have continued to show themselves as extremely unpatriotic elements blinded by narrow pursuit of power for very ignoble reasons for which they have contracted foreigners to undermine the government of their own nation using negative paid write-ups and advertorials to dish out lies and vituperations against the Federal Government.

'Having realised that they shall never be elected into the Presidency, these ill-bred and uncultured elements are now using every means to denigrate and desecrate the presidency, bring it to public ridicule, poison the minds of the people and incite them against the government and set the ground for confusion and mayhem ahead of the 2015 elections.

'In constantly criticising every strategy adopted by the President in the war against terrorism, the APC has not only confirmed its preference for insurgency but also exposed its underlining design to distract the government and frustrate the over-all anti-terrorism efforts.

'We therefore invite Nigerians to note that the APC remains a party which has nothing to offer than to attack well-meaning individuals and institutions of governments and sowing seeds of discord among peace loving people in our country. Theirs is clearly a question of the evil drummer who drums under the cover of the bush only to to jump unto the footpath and mount enquiry regarding where the drumbeats came from.

'Let it be known to the APC that power belongs only to God and that those who denigrate and disrespect authority at any level will never be entrusted with it. In constantly insulting the President, the APC has shown that they will remain in opposition as no Nigerian will entrust ill-mannered and disrespectful persons with the leadership of our great country.

'The APC must realize that they have started irritating Nigerians. As a ruling party, we charge them to show maturity and shed their penchant for lies, deceit and unnecessary attacks on well meaning individual, government officials and institutions.

'On our own part, we remain committed to the national interest and the welfare of all our people. We stand solidly behind President Goodluck Jonathan as he vigorously pursues his Transformation Agenda as well as his untiring effort in the fight against terrorism in the country. We also commend Nigerians for uniting against insurgency despite efforts by the APC to misdirect their energies for political reasons', the statement said.

Meanwhile, t he leadership of the Peoples Democratic Party (PDP) has debunked reports in some sections of the media that its National Chairman, Ahmadu Adamu Muazu at a meeting with the State Chairmen ordered the removal and closure of membership registers of the party.

PDP National Publicity Secretary, Olisa Metuh in a statement on Monday explained that the National Working Committee had instead 'directed that all membership registers must remain at the ward level and made completely accessible to all Nigerians in line with the provisions of the PDP constitution.'

The statement said state chapters are fully aware that Nigerians at all levels are free to join the PDP and as such 'cannot in any way whatsoever unjustly deny membership to anybody, especially as the PDP remains the only party truly owned by the people and represents the only platform for them to realize their full democratic credentials'.

With respect to membership registration cards, the statement said 'the National Chairman at the said meeting, consistent with the Party's Constitution, directed that requests for membership cards and registers must be routed through the Party structure at the States, and, after processing the requests, the cards and registers would be issued to the State chapters of the Party for onward transmission to the Wards where registration takes place'.

The National Working Committee therefore called on all party members and the general public to disregard the said reports adding that the PDP will remain committed to the principle of internal democracy and the provision of level play ground for all Nigerians to actualize their political aspirations within the ambits of the law.