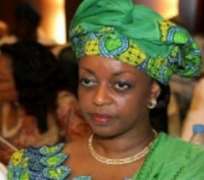 The Minister of Petroleum Resources, Mrs. Diezani Alison-Madueke, yesterday, instituted a fresh legal action against the two chambers of the National Assembly, challenging their powers to probe allegations that she spent N10 billion on chartered private jets.

The Minister filed the suit on a day the House Committee on Public Accounts invited the her, the Group Managing Director of Nigeria National Petroleum Corporation, NNPC, Andrew Yakubu, and Federal Airports Authority, FAAN, to appear before it on June 15 to explain their roles in the alleged N10 billion jet scam.

Others invited were the Managing Director, MD, of Pipeline and Petroleum Products Marketing Company, PPPMC, Mr. Haruna Momoh, Vistajet International Limited and other stakeholders. The suit

Specifically, the Minister, in the suit prayed the Abuja Division of the Federal High Court to go ahead and determine whether by virtue of the provisions of Sections 88, 89 and 214 of the 1999 Constitution (as amended), the legislature or any of its committees are legally and constitutionally empowered and/or competent to personally/physically probe or conduct investigation into allegations of fraud or other criminal activities said to have occurred in agencies under the supervision or control of the Ministry of Petroleum, when agencies exist that are legally and constitutionally empowered to carry out or conduct such investigations into alleged fraud or other criminal acts and prosecute offenders on conclusion of their investigations.

In the suit marked FHC/ABJ/346/2014, Diezani and NNPC, through their lawyer Chief Mike Ozekhome(SAN), insisted that the National Assembly lacked the constitutional powers to summon or investigate allegations of fraud against the Minister of Petroleum.

Consequently, Ozekhome urged the court to issue an order restraining the Assembly, whether by themselves, servants, staff, committees, privies, proxies or any other persons howsoever called, from summoning the applicants or any agencies under the applicants' supervision or control, to appear before them for the purpose of giving evidence and/or producing any papers, books, records or other documents, which relate to the unpublished official records of the applicants, without the consent of President Goodluck Jonathan.

Seek restraining order The applicants further prayed the court to grant a perpetual injunction restraining the legislative House, whether by themselves, servants, staff, committees, privies, proxies or any other persons howsoever called, from further conducting direct personal or physical probe, inquiry and/or investigation into any alleged fraud, corruption or other criminal activities in the agencies under the first applicant's supervision or control. Letters to Mark, Tambuwal

Besides, the Minister, through her lawyer, yesterday, wrote two separate letters to the Senate President and Speaker of the House of Representatives, David Mark and Aminu Tambuwal, respectively, urging them not to take further steps on the probe as doing so would not only amount to contempt of court, but also prejudicial to an earlier suit pending before the High Court.

The applicants argued that it was trite in law that once the pendency of a matter has been brought to the attention of a party, steps should not and ought not to be taken that will prejudice the outcome of the case or render nugatory whatever judgment the court would eventually arrive at.