My fans laugh until their heads ache - Baba Sala 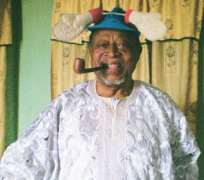 Hardly can the history of comedy, TV drama and stage play in Nigeria be told without mentioning the contributions of Moses Adejumo Olaiya, popularly known as Baba Sala, who celebrates his 74th birthday this month.

The Ijesha-born actor and comedian is an old man now and does not have the force and virility of his youth, but when asked if he is still a comedian, he said, "It is in my blood. If I have to do it, I can still do it."

He started out in life as a civil servant - a sanitary inspector, actually. After work, he would shed of his Wole wole garments and go to teach in the evenings. Then, late evening, he would go round town collecting daily contribution (ajo). Late in the night, he would transform and this time, into a highlife musician. The famous King Sunny Ade was one of his apprentices.

One day, he sought the face of God for his career and was told he should drop his other businesses and face music and entertainment solely. This he did, and according to him, "I never knew comedy would become something that would take me that far."

So far has he travelled that his name today is synonymous with comedy and rib cracking laughs. Making people laugh their sorrows away is something he loved and worked at throughout his career.

"In those days," he recalled, "people came to watch us at the National Theatre with analgesics ready, because they would laugh until their heads ached. I always want people to laugh and if I am on stage and people are not laughing, I will not be happy at all. I will make sure I do something that will make them laugh. In fact, in those days when we acted at the National Theatre and Ogunde came to show his films, people would prefer our comedy."

The name 'Baba Sala', he said, was chosen because he started out in a predominantly Muslim community. Though a Christian, he chose the names "Lamidi Sanni Oropo, Baba Sala." His stage wife, Iya Sala, he fondly called 'Wosi Wonkoko'. He chose his youngest wife to be Sala because of her small size. She fitted properly into the role.

"She (stage wife) is not my wife o. Karile and Sala herself were my wives. Karile refused to be Iya Sala because she always pitied me. I was never able to beat her or do anything rough with her on stage and out of sympathy, she chose to be Karile. But she trained Iya Sala and others."

Today, he has hundreds of stage plays, TV dramas and films - almost all comedies - to his credit. However, Baba Sala's life has not been laughter all through. In 1982, a simple mistake changed his life forever.

According to him, after years of making stage plays and achieving great popularity, one of his best fans, a Chief JMJ, advised him to go into films. JMJ pointed out that even Ade Afolayan, aka Ade-Love, a boy who trained under him, was already making movies. Ade-Love had made Ija Ominira then.

"He asked me how long I wanted to continue throwing myself on the floor on stage. I thought about it and decided to do it."

Then, films were not only made in Nigeria. Post production had to be done in the United Kingdom and it was an expensive business for which bank loans had to be procured. One of his fans then also happened to be Chief Obafemi Awolowo, the leader of the Action Group. Awolowo promised to help him with a loan at the National Bank. Interestingly, Chief JMJ happened to be a member of the NCNC, a political party that was anti AG. Both men put aside their political differences to help Baba Sala. Chief JMJ gave him three two-storey buildings to use as collateral to get the bank loan. He added two buildings of his own in choice places in Lagos and then, the loan was ready. He got a sum of N1.5m.

Not knowing anything about films, he approached a young and upcoming director, Ola Balogun, who made the first indigenous films in Nigeria.

"I gave him about four scripts and then he chose the one he thought was the best, Orun Mooru. He trained us and directed the film."

In those days, films came in 35mm format and carrying them from one cinema to the other was cumbersome. Ogunde, Baba Sala said, had to employ two hefty men to take the films round cinemas and then had two of his wives trained in London - to operate the 35mm technology.

When Orun Mooru had been made, he said they rejoiced greatly that, at last, they had made a film. Then Ola Balogun advised him to reduce the film to a smaller format, so that it could be more portable and be taken round more cinema houses at the same time.

For Baba Sala who had borrowed money to make the film and was still charging between 10k and N1 at the gate, it was a good idea. One he still regrets till today. In his words: "I thought he was helping me, so I agreed. That advice got me into trouble, killed me and turned me into the wretched of the earth. Owo aiye temi," he recalled painfully.

Once the film went into multiple copies, they fell into the hands of pirates and according to him, they had a field day.

"We had not broken even then, and the bank interests piled up rapidly."

The collateral were not all his and Chief JMJ, a man in his 70s at that time, was worried that at the threshold of his exit from earth, he would lose his labour to the bank.

It was a dilemma for Baba Sala as he had to sell his houses and other properties to offset his debt. Yet, it was not enough. He recalled that all the works of subsequent years went into paying the National Bank debt. He tried to get justice especially as one Mr. Adeyemi was fingered. The case was adjourned for years and a twist in the tale occurred when Adeyemi was arrested abroad for drug peddling. He was released after 10 years and when he came home, Baba Sala tried to reopen the case but Adeyemi died six months after.

One thing he is happy about is that he managed to recover Chief JMJ's houses and though the man was dead, at that time his children were happy that Baba Sala kept his side of the agreement.

"I respect the man a lot. A friend like that is rare. I felt he should not be made to suffer for helping a friend. Close to his death, he wrote me a letter and asked, 'Baba Sala, is this how my property will be lost to the government?' I was touched and resolved to pay everything back. I did and then went to settle in Ibadan quietly."

Baba Sala believed that the film would have made a huge break if it had not been pirated. That notwithstanding, he made other films. After Orun Mooru, he made Aare Agbaiye. Then, as a way of consoling himself, he made another, Mosebolatan.

"I called it that because I had thought it was all over for me. But Mosebolatan was a way of saying it was not over."

Other ones came after - Sugar Daddy, Obe Gbona, Return Match, Ana Gomina and a TV series, The return of Baba Sala. Ana Gomina was in video format and the last film he made because, according to him, he was badly cheated of the gains by the film marketers.

His costume was a joke in itself as he was always over dressed. Currently, the costumes are in Ibadan. His children are trying to build a museum in his name and even produce a book and documentary on him but it has not been easy securing the finances. For one, they do not have the required amount and attempts to get corporate sponsorship have not been successful.

Also, Baba Sala, who, though acknowledges that comedy today is different from what it used to be, will still like to put his old works on CD. He doesn't have the money but is hopeful that a benefactor might just come along and help him out.

He still has Orun Mooru on 16mm format and converting it to CD will require taking it abroad as the technology is unavailable in Nigeria. He also doesn't have the money, but he really wants to do it. For now, he spends most of his time in a church where he is an Elder Apostle. For a man who made people get headache from laughing, life has been sorrowful too. The saddest day in life was when he returned from UK and found two of his wives dead within 24 hours of each other.

"The happiest was when in 1974, I was given a national award by Olusegun Obasanjo. I was happy that playing a fool could bring me so much honour."

When he was to receive the award, he went in his stage costumes, and he recalled fondly that his appearance brought a smile to Obasanjo's military face.