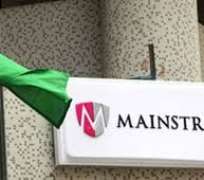 The Asset Management Corporation of Nigeria (AMCON) on Wednesday named Barclays Africa Group Limited and Afrinvest as financial advisers for the divestment of its shareholding in Mainstreet Bank Limited.

The corporation also appointed
In a notice titled, 'Invitation for Expression of Interest for the Acquisition of AMCON's Shareholding in Mainstreet Bank Limited', the asset management firm also named Banwo and Ighodalo as legal advisers on the divestment.

Mainstreet Bank is one of the three nationalized banks where  :

AMCON owns 100 per cent shareholding.
The process for the sale of another of the troika, Enterprise Bank, has been ongoing.

Mainstreet Bank as at December 31, 2013, had nine subsidiaries; and a distribution network made up of 201 branches, nine cash centres and 200 Automated Teller Machines.

Based on the consolidated management accounts of the Group as at December 2013, total assets were N330.2 billion and customer deposits were N155.8 billion.

According to AMCON, upon the receipt and evaluation of the EOI, a shortlist of buyers, who in its view are deemed to be fit and suitable from a regulatory perspective (amongst other things), would be prepared and would proceed to the first phase of the transaction.