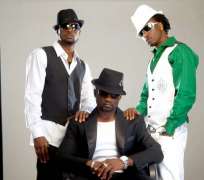 Speculations going round has it that the PSquare duo, might be on the verge of breaking up if an understanding is not reached.

The question now is what could be cause of their misunderstanding? Could it be an after marriage problem? Because if we look back, the twin brothers have been together for over 10 years in their entertainment without fighting themselves. So why now that they are married?

Although, there is no official statement to this effect, but from what the birds whispered, it was leant that the duo fought during a rehearsal and they had to be separated by their dancers.

Their elder brother Jude Okoye could not bear it as he took to the social media to set agenda for his fans by writing; “After over 10yrs of hard work, it's over. Am done.”

It would be recalled that in a certain interview, the PSquare brothers had said that it was only their mother that can make them separate. Well, we hope they set their camp right.