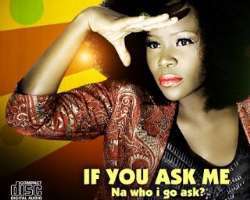 Former Nigerian Idols star and wave making artiste, Omawumi Boma Megbele, who has stamped her feet in the Nigerian music industry, has decided to diversify into agriculture just as the Koko Master D'Banj, did some weeks back.

Currently working on ONE.org's theme song project 'Cocoa na Chocolate', the singer said she joined the campaign for agriculture to be revived in Africa because it used to be the continent's source of income before the discovery of oil.

“I have always been into agriculture; my father has a 25-hectare land in Ubeji, in the outskirts of Warri. While I grew up, I used to go to the farm and we used to process cassava. I can make garri; I mean uprooting the cassava, the whole process of extraction and frying it. I can do it effortlessly same thing with fufu and tapioca. I am actively involved in agriculture because I grew in the farm.

“Everything we use is actually from agriculture especially most of the make-up women use. I am a part of the project because I believe we need to be actively involved in agriculture, especially the youths. They see agriculture as something that is 'uncool' meanwhile it could create employment for a lot of them. I wonder why someone would rather go to a supermarket to buy chicken at a price you could use to buy some chicks, rare them and after a while, you have lots of chicken for your consumption,” she said.

It would be recalled that recently, Nigerian musical superstar, D'banj, who joined other eminent Nigerians during a campaign to advocate for better investment in agriculture had said that the campaign is in line with the African Union declaration of 2014 as the year of agriculture and food security.