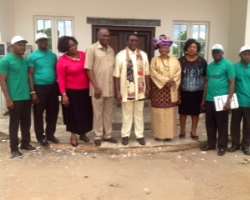 While the Goodluck Jonathan led Federal government is labouring to domesticate her Foundation onnEthics and Values, Imo Deputy Governor, Prince Eze Madumere, MFR, has maintained that Owelle Rochas Okorocha led government remains the forerunner is showing a more pragmatic way to to instilling ethics and values in her citizenry.

Speaking earlier today in his office while playing host to Dr. Sarah Jubril, an erstwhile presidential aspirant, Prince Madumere said Owelle Rochas Okorocha led administration had envisioned the role of strength of character in Nation building especially as it concern patriotism that led to the enshrining of these values even in the policy of the government.

Prince Madumere reminded the Special Adviser to the President on Ethics and the prayers in Imo State Anthem for upholding of Rule of law and against corruption as intricately enshrined in most of the policies and programmers of Imo State Government.

His words; "if you listen to the Imo Anthem, you will our prayers for Rule of law; you will appreciate our prayers against corruption and you will agree with me also that our prayers for education for the development of the mind and soul and its importance cannot be over emphasized. We also have a tripod on which the future four State stand. They are education, agriculture and word of God. You could also sift out development with ethical values embedded in the word of God. We celebrate not criminality anymore in Imo State. It is a reality though it comes with a lot of will power. I can assure you God has always been our strength.

Dr. Sarah Jubril, Special Adviser to the President on Ethics and Values had earlier called on His Excellency, the Governor of Imo State, Owelle Rochas Okorocha, ably represented by the Deputy Governor, Prince Eze Madumere, to embrace the establishment of Foundation of Advancement on Ethics and Value. He hammered on the need to

Special Adviser to the President who prayed for more wisdom of God upon Imo Governor and his Deputy harped on the need for religious tolerance as Jesus Christ and Mohammed had at no time prescribed a war-war situation but preached for peaceful coexistence. His Excellency, Deputy Governor of Imo State, Prince Eze Madumere, MFR, receiving materials on Programmes and objectives of Foundation for Advancement of Ethics and Values from Dr. Sarah Jubril, Special Adviser to the President on Ethics and Values. Imo Deputy Gov, Prince Eze Madumere, MFR, with Special Adv. to the President on Ethics and Values, Dr. Sarah Jubril in the middle flanked by Imo State Commissioner of Planning, Mrs. Ijezie and Comm. for Education, Dr. Uche Ejiogu with other members of the Foundation on Advancement of Ethics and Values after a courtesy call by the the S.A to the President on the Imo Deputy Gov.