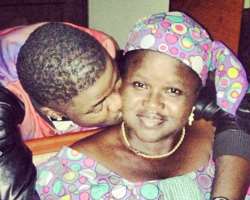 Despite leaving Empire Mates Entertainment (EME), Raoul John Njen-Njeng, popularly known as Skales, has disclosed that he still aims to get a big apartment for the mother whom he says had sacrificed a lot for him.

According to Skales, 'there was a time my mother had to do menial jobs just to provide for me. Then she was being paid N500 daily. When I went from being the first to the seventh in the class, she came to my school and was crying. She felt I was not focused anymore but there were subjects I never understood like Economics. She borrowed a lot of money just because of me.'

'I was about the poorest boy in my school. I was in a class where we had children of Commissioners, Senators and so many rich people but she wanted me to complete my education,' he added.

Skales added that he has been delaying his mum from coming to Lagos because he wants to give her the best comfort she deserves.

'The first thing I want to do is to buy her a very big house. She works in Kaduna and wants to come to Lagos but I keep telling her to give me time. I am going to tell her to stop working soon. I would get her a big house; buy her the best car and anything she wants.'