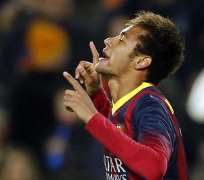 
The father of Brazil star Neymar on Tuesday denied signing a pre-contract with Barcelona until his son had left Santos for the Liga giants- but did admit to receiving 10 million euros ($13.6 million) in 2011 to guarantee a move by 2014.

Denying any irregularities Neymar senior told a press conference in Santos: “I asked Barcelona to drop confidentiality (concerning a contract) so everything was transparent and clean. I don’t owe anything.”

The Neymar transfer has engendered controversy in Catalonia and forced the resignation of Barca’s former president Sandro Rosell owing to a judicial wrangle over the deal.

The transfer cost 57.1 million euros, plus a 2-million-euro bonus if the 21-year-old star makes the finals of the Fifa World Player of Year award.

Neymar also will earn an annual salary of 11.3 million euros to be paid over five years.

His father denied media reports that he had himself earned 40 million euros on the deal via family firm N&N for last May’s transfer, which just preceded Brazil’s Confederations Cup success.

“Neymar could only leave Santos to go to Barcelona. My job was to safeguard and reinforce the gain,” said Neymar senior, adding he could easily have earned a bigger cut.

“I am sure I could have picked up 120 million (euros). (But) it is absurd for people to talk when they don’t know the details and I did not receive a 40 millions euro advance,” he insisted.

Spanish lawyers are now poring over the terms of the deal after a Barcelona club member made a complaint.

According to the Spanish court resolution released last week, Barca paid 40 million euros to N&N for breaking a previous agreement to sign Neymar in 2014 and sign him a year earlier.

Barca say Neymar’s father agreed to let the club reveal the deal details because he believed the scandal over the signing was “unfair”.

Rosell stepped down on Thursday and was replaced by Josep Maria Bartomeu, who made the details public.