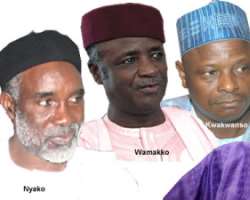 
The five governors who defected from the Peoples Democratic Party to the All Progressives Congress on Monday shunned a suit filed by the PDP in a bid to remove them from office.

The Independent National Electoral Commission (INEC), which was joined as a respondent in the suit, was also not represented in court.

PDP had asked the Abuja Federal High Court  to sack the five governors - Murtala Nyako (Adamawa), Rotimi Amaechi (Rivers), Aliyu Wamakko (Sokoto), Rabiu Kwakwanso (Kano) and Abdulfatai Ahmed (Kwara) - on the grounds that by their defection, they had forfeited their offices.

The suit was slated to commence on Monday but when the matter came up before Justice Gabriel Kolawole, none of the governors was represented by counsel.

PDP lawyer, Dr. Alex Izinyon, SAN, who led other senior lawyers including Damian Dodo, SAN, O. A. Omonuwa, SAN, and S. Ajogu, SAN, informed the court that the governors had failed to respond to court processes, including originating summons and hearing notice, that were served on them.

Izinyon explained that, following an order for substituted service on the governors, the court processes were served on them through the APC national secretariat.

'They were served through the APC national secretariat which, in our humble view, was the most effective way to reach them.

'We thought by now there ought to have been response,' the PDP counsel said.

He thereafter asked the judge to give him a date to address the court, even as the respondents were yet to respond.

'We are asking for a very short date to address the court; this matter is a very urgent matter,' Izinyon added.

Izinyon asked the court to order that the fresh hearing notice be pasted at the APC national secretariat in Abuja, as substituted service on the governors.

In a short ruling afterwards, Justice Kolawole adjourned the matter till February 6 for hearing, and ordered that, as a means of service on the five governors, the new hearing notice should be pasted at the APC national secretariat, in addition to its publication in two national dailies.

In the suit, PDP is arguing that the governors should be sacked because they have forfeited their offices by leaving the party on which platform they were elected.

In the event that the governors are sacked from office, PDP wants the court to order the deputy governors or speakers of their state houses of assembly to assume their positions.

The PDP asked the court for several reliefs, among which,  is a declaration that by the combined provisions of sections 177 (c), 221 and 222 (c) of the 1999 Constitution, the governors could not  continue to enjoy the mandate given to it (PDP) by the people/electorate as they  (governors) had  defected to another political party.

The Abuja FHC was also requested by the PDP to make a declaration that in the absence of any division in the PDP, the governors had vacated or forfeited their seats upon their defection to the APC.