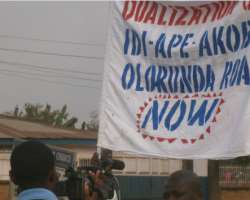 Idi Ape-Akobo Ojurin-Olorunda road is known to me as a resident for the past ten years now. The road is known for the horrible traffic hold-ups due to spontaneous increase in the population of the residents with corresponding increase in the volume of motorists. The last time the road was rehabilitated; it didn't last for two years after two or three rainfalls destroyed the drainage and increased the pot-holes in every-five meters of the road.

This could be as a result of shabby and inferior materials used by the contractors who I suspect were not properly contracted with the necessary bidding and procurement principles of international best standards. Most of these road contractors are mostly party loyalists or relations of the people in government and what we end up getting are low quality roads.

This idea of one-man-protest came immediately when I got back to the country almost after three years for a World Bank project with the Federal Ministry of Works on Governance and Accountability Action Plan (GAAP) concerning federal government roads. The traffic situation in Akobo still remains the same as I left it four years ago. It is always a great battle from Akobo Ojurin axis to get to General Gas bridge in order to link anywhere you may be heading to. It takes nothing less than two hours forty-five minutes to get through the traffic jam that under normal circumstances should take any motorist only ten minutes. This same case repeated itself on a particular Monday morning when I was going to board an early morning flight to Abuja from Ibadan airport for the project meeting but got stocked in this horrible traffic which made me settled for an afternoon flight that almost cost me double the price I should have paid for the morning flight and I eventually was late for what was the inauguration meeting for the project. Only God's know how many innocent children and adults that get stock regularly in this traffic jam that have made them to continued to get late to their schools, working places, and appointments due to the negligence of those representatives voted that refused to take urgent action.

Meanwhile, I decided that something have to be done before going back to Spain. I picked the Christmas and New Year holidays to take a decisive action. I wrote and submitted an application letter to stage a one-man-on-the-spot-peaceful-protest on Friday, 27th 2013 to the Oyo State Police Commissioner and copied the Divisional Police Officer (DPO) Akobo, The FRSC office at Eleyele and my lawyer. I was sent back to go and make three copies of the application letter when I got to the Police commissioner's office as this was said to be the normal procedure. In less than ten minutes I came back with three copies of my appeal letter. The Officer-in-charge took the copies and returned a stamped copy to me a copy as evidence that the application was received. I went with a friend back to the Police Headquarters at Eleyele again on Tuesday 31st December 2013 for the approval; my lawyer also met us there. After some questions and answers section with the Deputy Commissioner of Police (DCP), he directed me to the Protocol sections where I was told that they are aware of the protest and will send some Police escort to take care of my protection as earlier before 6 am.

The protest is arranged to start by 6am and end by 12mid-day to match to the Governor's officer and deliver my appeal letter and have a press conference with the media. It was indeed another argument section when a written approval was not issue and the Police officer -in-charge refused to give me his telephone number so as to call to remind them again, a least a day before the protest. On Thursday, 2nd of January, 2014, I went back to the Police Headquarters at Eleyele to remind them personally but the same Officer-in -charge made me to believe with another Officer that just came to his office that all arrangement had being made for the protest the following day. It is my belief that the Nigerian Police is an important institution that cares for citizen welfare and protection, thus I didn't have any reason to doubt them, I believed the fact that they said they had made necessary arrangements for the protest.

On the protest day Friday 3rd, I got to the venue at General Gas by few minutes past six o'clock in the morning and to my greatest surprise couldn't see any Police escort/vehicle detached or sent from Eleyele Police headquarter as promised. Many questions came to my mind: Is it true that the Mission of the Nigerian Police is “to deliver qualitative and efficient security and law enforcement services to the citizens of Nigeria”? What is going to be my plight if some hoodlums come in large number to hijack this protest and start looting shops and destroying government property? Do I need to hire private security personnel for protection if there is Police? Is this the reason why I was not given a written approval and so that they can deny given me any approval if an ugly scene developed? Is this the reason why the Officer-in-charge refused to give me his telephone number? Why can't the Officer that got my application letter with my telephone number boldly written on this paper call me to explain the situation? Do I need to give money to Police to protect me as a citizen? Did my going to Police headquarters a day before the protest to remind the authority count? What kind of Policing are we running in Nigeria for God's sake? Can't our leaders do things with integrity and responsibility in this country after 54 years of Independence and 100 years of the country existence/amalgamation? This system can get somebody mad-that is the reason why people are over-stressed everywhere. I was fuming with anger while at the same time pasting the placards. I said to myself that I have all right as a citizen of this country to stage a protest. I then called my lawyer to inform him about this shocking and embarrassing development. I refused to let this lapses disturb my voluntary protest to represent the voices of my co-residents. I knew that I am fighting a right case to save my people from the horrible traffic hold-ups and pot-holes.

Meanwhile, I had my protest with large numbers of residents and motorists given their consent and support for the protest. I heard the saying that dualization of the road has been over-due. Some were even asking thanking me and asking when and which day are we starting the dualization of the road. Few hoodlums passed by and made some unprintable words. Few of government officers and politicians were cornered by the Nigerian Television Authority (NTA) and Broadcasting Corporation of Oyo State {BCOS) for interview on the Akobo road issue. Despite a Traffic warden presence at the same junction I was staging my peaceful protest, the traffic was almost the same-slow-pace since around 6:30am that eventually start the protest till 12 noon when leaving for Governor's office.

Moreover, by the time I got to the Governor's office, the number one citizen of Oyo State was about going out for Jumat service and was told to drop my appeal letter at room No 37 and that the issue will be looked into as soon as possible. The letter also appeal to Governor Abiola Ajimobi to take urgent action on Akobo road dualization, to rehabilitate the joining roads, and make provision for Side-Walks (Foot-path for pedestrians), Bus-Stop and drainage mechanism. I later addressed the media that include NTA, BCOS, FRSC, NANS, Punch Newspaper reporter and other new generation FM radio reporters. The protest was indeed successful as the State Commissioner responsible for the construction of roads was interviewed that very day and he promised that the road will be dualized this year and that the Budget has taken care of the road.

Adewale T Akande, a resident of Akobo,
Ibadan and road traffic safety consultant based in Spain