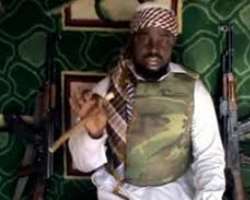 Boko Haram, the extremist Nigerian Islamic group, operating mainly in the Northern parts of the country allegedly financed and backed up by top political leaders agitating for full Islamic law to be enthroned in all northern states in Nigeria.

An impeccable source disclosed that members of the dreaded Islamic sect have decided to soft-pedal in their fight against the federal government.

In a statement credited to the spokes man of the Boko Haram, Mr. Dangolie,it said that they are ready for unconditional cease fire to allow a sleeping a sleeping dog to lie, provided that their leader, Mr. Kabiru and other members detained by the Nigeria government are released from detention.

Mr. Dangolie, added that they have been communicating with some top political leaders in the country with passionate request for the government to consider their plights as they had already ceased fire since 1st of January 2014

In his word 'our sponsors are top politicians who give us the financial and moral encouragement to act the way we do and they are still working with us against this present administration, especially in the upcoming 2015 general elections. 'We are not afraid of death' if we get no tangible response from the powers that be, we will be forced to visit Abuja with our riot for destruction, he threatened.