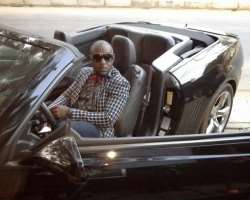 Just after news broke in the media that Nigeria's celebrated movie star, Jim Iyke, was involved in a brawl at the Crave Cafe at Adjiringanor, East Legon – Accra, Nollywoodgists.Com made an effort to investigate the story to find out the details of what actually happened at the said place involving the movie star. (Read HERE if you missed the initial report)

Speaking to one Nana Kwesi who invited Jim Iyke to the Cahaya lounge where the incident happened, he told Nollywoodgists.com, Correspondent in Ghana Mustapha Ayinde Inusah/ AKA Attractive “how funny people twist and turn stories around.”

He added that all the details given in the publication about Jim Iyke fighting over $ 10, 000 was fabricated.

“There was an issue between Jim Iyke and his business partner (name not disclosed to us) at the Cahaya Lounge just opposite ex-President J. J. Rawlings house and not Crave Café as the media reported it. The issue had nothing to do with Jim Iyke fighting over $ 10,000. Also, Jim Iyke never attempted to pull a gun,” Nana Kwesi revealed.

He continued that after the gentleman parked, he got out and started behaving funny. The gentleman wanted to attack Jim Iyke so he Nana intervened and prevented the man from attacking Jim.

The man went back to his car and pulled an amount of $ 10,000, haranguing that he wanted to give it to Jim Iyke if the latter had signed a particular document.

Perplexed Nana Kwesi inquired what the real issue is and why the man said that he wanted to give Jim Iyke $ 10,000 if he Jim had signed a document. The man, who alleged that he is a business partner to Jim Iyke, said he invited Jim Iyke into a meeting at Royal Fiesta hotel.

Jim Iyke got there and he was asked to sign a contract but because the contract was not too clear, Jim requested that there is a need to involve a lawyer or legal brain to peruse the document before he could append his signature on it.

Because of that, the man got fumed, accusing Jim Iyke of wasting his time and also spoiling his business because there were other people involved who wanted Jim to sign so they can carry on with the business.

After everything was settled at the Lounge, the man reported to the police that Jim Ike had attacked him. When the police got to the scene, the people around who was also hob-nobing and were eye witnesses to what ensued, narrated to the police that it is the man who rather attacked Jim Iyke and not the converse. The police left without causing any arrest.

All attempts by NigeriaFilms.com Reporter In Ghana Mustapha A Inusah to get the name as well as the other side of the story (the man), proved otiose as at the time of making this publication. We promise to follow up on this story so stick and stay with us.

Actor Jim Iyke Involved in A Street Fight In Ghana Over $10,000 And Was Allegedly Arrested!