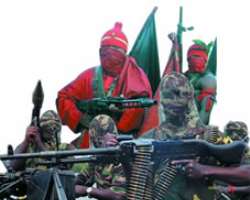 But the Joint Military Task Force (JTF) has told Nigerians to disregard the claim because nothing like that took place.

According to the group, the attack is a demonstration of the resolve of the militants to defeat the Nigerian government and reduce export of crude oil.

In a statement signed by a new spokesman, Bakabio Walter, the group said its fighters attacked the Agip Tura Manifold linking Teibidaba, Obama and Brass Tank Farm at Agbara Field.

JRC in the statement while calling on Niger Delta youths to enlist in its army, called on all Niger Deltans in the Nigerian Army to resign to join the fight against the Nigerian government. It also gave a two-week ultimatum to all international oil companies and diplomatic missions in the region to close their facilities and evacuate their nationals so as not to be caught in the emerging war.

The statement reads: 'As we continue to perfect plans on how to defeat Nigeria, liberate our territory and build an independent Niger Delta State, new pre-emptive strikes are being carried out in various parts of our territory.

'The latest being the explosion and attack on the heavily guarded Agip Tura Manifold, linking Teibidaba, Obama and Brass Tank Farm, at Agbara Field at about 4:05am on Wednesday, March 3, 2010.

'Our revolutionary fighters overpowered soldiers of the occupation force of the Nigerian State (JTF), before going ahead to blow up the Agip Tura Manifold.'

According to the group, the soldiers surrendered immediately and were not harmed in the process keeping to the rules of engagement. 'They declared support for our revolution and were allowed to go on the spot. As we speak now crude oil is flowing on the Brass River for independent verification.' It continued: 'By this statement we are calling on all Niger Delta youths to come and enlist in the Revolutionary Army of Niger Delta. Also, all soldiers in the Nigerian Army of Niger Delta descent should resign enmasse and come and join our army for we shall surely defeat Nigeria.

'Furthermore, we demand the immediate vacation of all the international oil companies (IOCs) operating in the Niger Delta territory pending future negotiations with the emerging Niger Delta authority. We also call on all diplomatic missions to Nigeria to close all their facilities and evacuate all their nationals from the Niger Delta Territory not later than two weeks from now so that they will not be caught in the line of fire. We are not at war with them but with the Nigerian State.'

A source in Brass confirmed to Daily Sun that indeed oil was flowing into the Brass River but it is not as a result of any attack but sabotage by pipeline vandals. However, the Media Coordinator of JTF, Lt. Col. Timothy Anthigha, dismissed the claims of JRC as tissue of lies. According to him, by now Nigerians should know the antics of groups like this, they thrive on lies to just create a situation of instability.