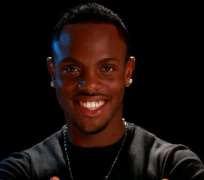 When you meet Melvin Oduah for the first time, the first thing you observe is his unassuming humility. He's a smart and talented young man that strives to get to the top. He is an actor cum model many people want to see onscreen. He radiates an impeccable taste that marvels people who know him very well. He can sometimes appear to be extremely unapproachable, but it is his modesty that weeds out every doubt about him. Having been recognized as one of the amazing contestants in the Big Brother Africa The Chase, it's an established platform for him to be heard and appreciated in the society.

Melvin was born into the family of Mr. & Mrs. Johnny Oduah. He has a twin sister, Melvina and they are the first born of their parents, followed by another set of twins, Tony and Tonia. He had his secondary education at the Lagos State Model College Kankon, Badagry, Lagos and attended the University of Port-harcourt where he obtained his B.Sc in 2007 before going to the Lagos State University where he got his PG in Business Administration. Melvin combines acting, modelling and presenting. When he's on movie set, he pays full attention to the craft and when he has modelling jobs or presenting, he does that passionately. The system works for him.

He's a multi-talented youth and has several awards to his credit. As a model, he's been rewarded by the Nigerian Model Achievers Awards (NMAA) as the most promising model of the year. As an actor, he's won the TAVA awards for his role in a sitcom, HAPPY FAMILY. He's got other awards from some entertainment outfits.

However, it is poignant to say that he has not been living under the shadows of anybody as many people think. He's gradually creating his own world and hopes to live in it. Melvin, who has been an inspiration to many African youths and has a special flair for the entertainment industry. His journey started years back when he participated in the Gulder Ultimate Search and came first runner-up; he proceeded further to do Mr. Nigeria beauty pageant and got rewarded as a runner-up. That's a platform for him. Did he give up like an average youth would have done? That's an emphatic NO! When the Big Brother Africa audition came up, he joined the crowd to be a part of those to be auditioned and was lucky to grab the opportunity to be in the big brother's house with music vixen, Beverly Osu as Nigerian representatives.

I had a long chat with him for the first time during the 9th edition of the Africa Movie Academy Awards (AMAA) and he comes across to strike me as flexible young man who really knows what he wants in the society and chooses to direct his life instead of letting the society and wide-ranging views decide for him.

Currently, he's leveraging on the platform of being one of the finalists that participated in the Big Brother, The Chase competition and has won the hearts of those that love entertainment because of his good carriage. He's become a voice to lots of young people and that prompts him to always be fair and objective. His humble mien remains a surprise to many and that keeps getting him global recognition.

On social networks, he hasn't failed to appreciate those whose words were a part of impetus for going this far and his fans for their constant support and encouragement.

It's A Lie, Bleaching Cream Didn't Burn My Face--Steph Nora Okere Cries Out