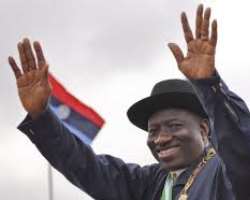 
President Goodluck Jonathan today  called on African leaders to do away with policies that could obstruct intra-African trade and unity of the continent.

He regretted that compared to the European Union and Asian countries were trade were 70 and 50 per cent respectively, trade between African countries has drop to as low as 11 per cent, saying that it was sending a wrong signal to the world that the continent cannot stand alone except the rest of the globe come to assist in one way or the other.

He made the call at joint press briefing he addressed with his Kenyan counterpart, Uhuru Kenyatta, at the Kenyan Government House, after a bilateral meeting and the signing of various Agreements and Memorandum of Understanding between Kenya and Nigeria.

The President Jonathan stressed the need for African countries to work together to move the continent forward, adding that Africa countries must go beyond primary production and servicing industries abroad with their raw materials either from forest produce or solid minerals.

“We must work hand in hand to add values to what we produce and encourage intra-African trade.

“If you go to Europe, trade within the EU nations is about 70 per cent, thereby, telling the rest of the world that they can survive without going outside the EU.

“In Asia trade between the Asian countries is about 50 per cent also telling the world that they can stay alone.

“But in Africa, trade between us has drop to as low as 11 per cent, that is a way of telling the world that we cannot stand alone except the rest of the globe come to assist us in one way or the other,” he said.

He noted that administrative constraints in term of visa restriction, consular and immigration issues were among factors inhibiting trade and free movement of goods and services within the continent.

He said the regional blocs like the East African Economic Community, SADEC and ECOWAS must come up with good policies that will encourage trade and free movement of goods and services.

“We are looking forward to the day that the whole of Africa will be an economic bloc where we can move just like the EU arrangements.

“That is the only way we can create wealth for our people and we will no longer be talking of poverty alleviation and so on,” he said.

Jonathan noted that the co-operation between Nigeria and Kenya was critical because of the strategic positions both countries occupy in the continent.

“We believe that if there is a big handshake from the East to the West, Nigeria and Kenya working together we will not only help our two countries but be a platform to liberate Africa. He said his state visit to Kenya was critical to deepen economic ties between the two countries.

Also speaking in support of his Nigerian counterpart, Kenyatta said the visit of President Jonathan was an indication of a strong brotherly relation between both countries.

He said the agreement signed would strengthened the bond between the two countries, increase trade and investments and create better environment for culture and tourism.

In a communiquÃ© later read by Kenyan Cabinet Secretary on Trade and Foreign Affairs, Mrs. Amina Mohammed, said both leaders agreed on setting up a Nigeria-Kenya Bi-national Commission to deepen cooperations.

She said to increase trade between both countries, both leaders directed the relevant authorities in their countries to identify measures require to eliminate tariff and non tariff barriers to trade.

Mohammed said that the leaders also directed that the relevant authorities of the two countries to expedite the conclusion of an agreement on immigration matters.

She said both leaders re-dedicated themselves to fighting Trans-border crimes, human trafficking Maritime insecurity and piracy.

“The two President condemned the heinous acts being committed by terrorists and criminal gangs including Al-shabab and Boko Haram.

“They also renew their countries determination to fight terrorism along with the rest of international community,” she said.

The Agreements on Visa Exemption for holders of Diplomatic Passports and MoU on conclusion of Agreements on double taxation and the promotion and protection of investments were signed.

Minister of Interior, Comrade Aba Moro, said  that the Agreement signed had addressed the issue of illegal deportation of some Nigerians from Kenya.

“The issue of the Nigerians that have been deported was raised.

“The two Presidents agreed that the Ministers of Interior of the two countries should further discuss the issues involve and to treat cases on their individual merits.

“We are further going to explore the avenue with a view to ensuring that justice is seems to be done to the Nigerians that have been deported and forestall further occurrence,'' he said.

President Jonathan before the bi-lateral meeting, had laid wreath at the Mausoleum of the First President of Kenya, Late Jomo Kenyatta.