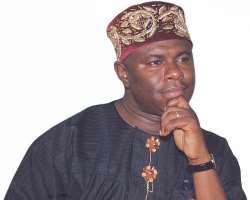 Hon. Dakuku Peterside, Chairman, House Committee on Petroleum Resources (Downstream) and representative, Andoni/Opobo-Nkoro Federal Constituency has described the new faction of the Peoples Democratic Party, PDP as a necessary detour in the continuing battle to build an inclusive and all embracing national party where opinion of all members will count. Peterside made the statement yesterday following a walkout by seven PDP governors and other delegates at the PDP special convention which held in Abuja, the nation's capital.

The law maker who is particularly pained by developments in the ruling party however urged Nigerians to be steadfast and to lend their support to the new faction because it represents hope and liberty which the immediate past leadership of PDP seeks to destroy.

'Politics is about inclusion and participation. A political party is believed to have failed in its duties as an organisation when it deliberately stifles voices and discriminates against its members for no good reason.

The most cherished element of democracy is freedom. I had prayed fervently for a truce but the events of today aptly show that many people are diametrically opposed to peace , freedom and they are prepared to do everything possible to frustrate any peaceful resolution,' he said.

Peterside who accused the old PDP of violating its constitution, coupled with the fact that it encouraged unnecessary witch-hunt called on the new faction to be fair and to ensure that everybody is accommodated irrespective of age, sex or geo-political zone. 'The truth about our country today is that we can no longer pretend or take the electorate for granted.

The political elite have provided a lot of lessons, whether consciously or unconsciously and like some politicians, I know that the pattern of voting come 2015 will be greatly influenced by this knowledge base which will determine winners or losers,' he said.

He however called on Nigerians to be optimistic and to remain vigilant & prayerful because God is still interested in the country's affairs.