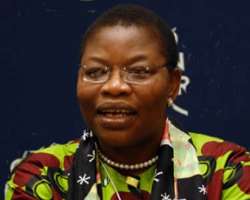 
Nigeria spent over  N1tn on  the National Assembly members   in the last eight years, according to a former Minister of Education, Mrs Oby Ezekwesili.

'Since 2005, the National Assembly members alone have been allocated N1tr,''Ezekwesili said.

Ezekwesili, a former World Bank vice president for Africa, in a keynote address delivered during one-day dialogue session on the 'Cost of governance in Nigeria, ' said  that  banks earned N699bn as interests last year  on loans secured by the government.


She was uncomfortable that '82 per cent of Nigeria's budgetary cost goes for recurrent expenditure.'

To buttress her claim that  much was being spent   servicing those in government, she said that   ' a research conducted in the United Kingdom identified Nigerian legislators as being the highest paid in the world.'

Ezekwesili, who was also a former minister of Solid Mineral in Nigeria, challenged civil society  groups to demand a mini-national dialogue that centres on good governance  and the the release of the Steve Oronsaye report on Rationalisation and Restructuring of Federal Parastatals, Commissions and Agencies.

'There should be effective demand by civil society groups of the report of the   Oronsaye report. You should also demand  a mini-national transparent dialogue because it touches on the heart of  good governance', she stated.

She also pointed out that  one of the greatest mistakes of the Olusegun Obasanjo administration under which she served twice as a minister was that Nigeria delved into democracy without necessarily doing away with a  military mindset.

'There is a drawback to the military era.  One major mistake of the government under which I served was that we simply got into democracy and did not spend reasonable time  getting   every citizen;  every leader and every institution to do away with    militaristic ethos and principles from their minds,' Ezekwesili added.

According to her, the social dilemma which the country  currently finds itself would be overcome if stakeholders, especially lawmakers,   consider  part-time legislation as a means of  bringing  down the cost of governance.

She said  part-time lawmaking  would  ensure that the right people got into governance.

'Things will improve through part-time legislation. It will also reduce  the number of people who will go into the National Assembly. You must have means of livelihood so that you won't have to depend on public funds, 'she said.

The former minister argued  that Nigeria's problem was not the system of  governance  but  more of the kind of people managing it.

Ezekwesili said while other countries were  moving forward technologically, Nigeria was trapped by oil, a natural resource which it loses a revenue of about  $1.6bn annually.

She said, 'When I was in government, I was totally  debating  public  policies. We must debate public policies as a nation because if we don't do so, we will make silly mistakes because we don't involve the stakeholders. So policy debates must be encouraged.

'The culture of personalising policy dialogues must stop. When you have a problem, you don't leave the problem and begin to chase other matters.

'I feel sorry for any person who is fairly okay in this nation and doesn't care about the poor because there will be an implosion. Whatever treatment that is given to the poor and vulnerable in the society must matter to everybody because except we have social inclusion in the society, we stand the danger of implosion.  This  has happened in other countries which ignored the vulnerable people.'

In his speech, the Executive Director of CISLAC,  Ibrahim Rafsanjani, condemned the cost of governance in Nigeria.

He said, 'There is  recent media report of our National Assembly members being the highest paid in the world. The size of the  cabinet at the executive level, including the retinue of superfluous aides and special assistants,   is alarming. The fact that the  10 planes  in the Presidential fleet   gulp N9.08bn annually is something that must be looked into.'