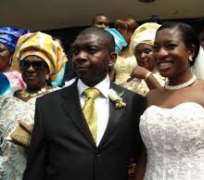 It's no longer news that one of the actresses in Nollywood who is working very hard to be enlisted amongst the A-List actresses, Chika Ike is divorced. Recently, the Tony Eberiri, the ex. husband, we gathered, has cautioned her to desist from posting rubbish about him on social media. The husband, according to a source, strongly warned the actress to desist from accusing him alone as an architect of their marriage misfortune.

www.nollywoodgists.com gathered that, the man blasted her to stop all the campaign of calumny or see the other side of him.
If you recall, Chika who was always talking about her life on social media posted a picture she snapped in the court of law during her marriage case brouhaha. And just of recent, she was said to have quoted, through her manager, that she was a victim of domestic violence; all these have been debunked by the gentle disposition husband who said all she has been talking about is total gabble and has no substance at all.

Well, close family source hinted Nollywoodgists.com a few hours ago that, the husband has sent strong warning to her to desist from such act as soon as possible.

Chika in her response allegedly said 'What do you mean! Don't you know I am a star?”

But come to think of it, is Chika Ike really a star? If she is claiming to be a star; what do we call the likes of Omotola Jalade, Genevieve Nnaji, Kate Henshaw, Rita Dominic or even Monalisa Chinda? Is she really a star? Please send in your answer!