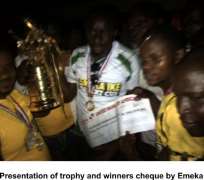 If information reaching Nollywoodgists.com is anything to go by, then controversial actor, Emeka Ike might lose the recent ambassadorial deal he clinched with the Federal Government. The actor, who had issues with Segun Arinze over the presidency of the Actors Guild of Nigeria (AGN) few years ago, might need to explain himself and then clear his name of an alleged fraud he is being dragged into at the moment.

Emeka Ike was few months ago named an ambassador of Rhythm 'N' Play, an initiative of the Ministry of Sport aimed at growing grassroots sports in Nigeria.

A source who claimed to be in the know told Nollywoodgists.com that Emeka has reportedly been reached by some people in the Sports Ministry to explain what he knows about the allegations levelled against him by a grassroots football team, Golden Stars, which reportedly won N500,000million at a football competition organised by the actor tagged 'Emeka Ike Desert Competition'.

The team alleged that the cheque presented to them after winning the tourney has severally bounced whenever it was presented in the bank. Emeka Ike has reportedly failed to do anything to rectify the problem since then, the team also alleged.

The source said with the way things are going, Emeka Ike might forfeit the ambassadorial honour and replaced by another person.

Not to rely on this information alone, Nollywoodgists.com made efforts to call Emeka Ike on the matter but he could not be reached to react to this gist as his phone number wasn't reachable. However, one of his representatives told us when called on phone that they are not aware of any move by the government to revoke his deal.