By Collins Oppong, The Golfer Newspaper 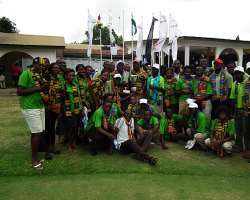 An 85- member contingent from Otukpo Golf Club in Nigeria routed the home field of Tema in a two-day International Matchplay competition at the Tema Country Golf Club.

Led by President of the Senate, Senator David Mark, the 'Red Lions' were excellent from tee to green to secure victory on the Saturday Double Matches as well as the singles match on Sunday that left the home team in a yawning distant from the leaderboard.

Otukpo Golf Club received two stunning trophies; one for keeps and the other to be kept by them as an away trophy anytime the two clubs play in an international matchplay.

At the end of the two-day event Otukpo Golf Club scored a remarkable 59 points to Tema Country Golf Club's 36 points.

The competition, the first of its kind between the two clubs was to promote co-operation between them and help develop golf in both countries.

The Otukpo team mainly consisted of young golfers who are products of the Youth Development Policy of the club, which is the brainchild of Senator David Mark.

Established about ten years ago, the Otukpo Golf Club is noted for its supreme commitment to the growth of golf, and owner of the club, Senator David Mark consistently pays the subscription fees of all its members.

In his closing address, Vice Captain of Tema Country Golf Club, Nana Antwi Boasiako duly congratulated the team from Otukpo for the victory and admitted that their members came more prepared and deserved the honor of winning the match play.

In his speech, Senator David Mark thanked golfers of the two participating countries and encouraged both clubs to take the issue of Junior Golf development very seriously. He further suggested that the Matchplay should be a yearly event.

Joseph Ocran, Managing Director of MBG Ltd (the sponsors) expressed satisfaction for the success of the event.

The host team adorned their guests with beautifully designed pieces of Kente as gifts, while Otukpo Golf club presented souvenirs as well as a big plaque of the club's photo to TCGC. SENATOR DAVID MARK WITH OTHER DIGNITARIES ON THE HIGH TABLE TEAM OTUKPO IN A GROUP PHOTOGRAPH