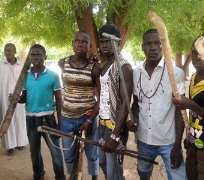 SAN FRANCISCO, June 30, (THEWILL) – The Joint Task Force (JTF) in Borno State, Operation Restore Order, on Sunday, said there is no cause for alarm over the activities of the vigilante youth groups, popularly known as the ‘Civilian JTF’, which have been assisting the security operatives in the recent clampdown against Boko Haram in the State.

A statement issued by JTF spokesman in Borno, Lt. Col. Sagir Musa, assured the public on the activities of the Civilian JTF, saying their activities are being monitored to ensure that they operate within the confines of the law.

Urging residents of the State to support the ongoing efforts to wipe out the insurgents, JTF said the campaign to end the insurgency should not be left to the security agencies alone.

"The Joint Task Force, Operation Restore Order, wishes to remind the public that the security situation in Borno State occasioned by the activities of Boko Haram terrorists demands and justifies that all well-meaning individuals and groups must contribute to bringing the menace to an end.

"It is against this backdrop, that the Task Force supports and commends the heroic and patriotic efforts of citizens and residents of Borno State, especially the youths who are daily rising against Boko Haram terrorism in the state," the JTF statement said.

According to the statement, following the fears being expressed in some quarters over the activities of the Civilian JTF in Maiduguri, "the JTF has since commenced the process of monitoring, guiding and regulating the activities of the vigilante youths with a view to making them operate within the ambit of the law,” adding “ This is in order to making them more useful in fighting Boko Haram terrorism in Borno State without becoming a nuisance to the society."

The JTF spokesman therefore urged residents of the state capital to report any unwholesome acts perpetrated by the youths to the JTF even as he called for total support in the fight against terrorism in the state.