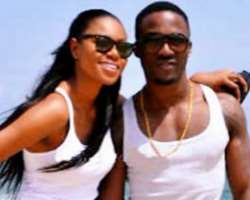 Though he sang in one of his tracks that 'all I want is your waist' but the 'Kukere' crooner, Iyanya has replied Ghanaian actress, Yvonne Nelson, who he reportedly dated, that he only wanted her for fling and not for love.

Speaking with on Tim Westwood show in the UK, Iyanya said he only wanted the actress for pleasure and not for true love like she would have thought in her mind.

Hope Yvonne will not be angry with Iyanya again after this confession?