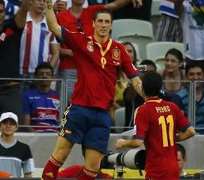 World champions Spain survived a first-half pounding by Nigeria before securing their Confederations Cup semifinals with a 3-0 win over the African champions who were eliminated on Sunday.

A superb individual goal from Jordi Alba, one of eight Barcelona players in the starting line-up, put Spain ahead after three minutes before Fernando Torres took his tournament tally to five with a 62nd minute diving header, three minutes after replacing Roberto Soldado.

Spain were given a good examination by hard-running Nigeria for most of the first half, but poor finishing cost the Super Eagles any chance of a victory. Alba rounded off Spain's win with his second goal in the 88th minute.

Spain took almost total control after the restart and will face Italy, who they beat 4-0 in last year's Euro 2012 final, in Thursday's semifinal in Fortaleza after completing Group B with a maximum nine points.

Nigeria finished third with three points from their win over Tahiti.

"Nigeria have a very dynamic style of playing and they were really going for the win in the first half but we had a bit more control in the second period," Spain coach Vicente Del Bosque told Telecinco.

"The humidity here is incredible but I think we both have very technical players who can control the game and that meant at times we were able to conserve energy."

Alba slalomed his way past four opponents and got a lucky deflection off the shin of defender Kenneth Omeruo before firing home from eight metres for a wonderful goal in the third minute.

The 19-year-old Omeruo, the youngest member of the Nigerian squad, had even worse luck eight minutes later when he was injured defending and carried off on a stretcher.

Chances regularly fell to both sides in an exciting end-to-end game with John Obi Mikel, Joseph Akpala and Brown Ideye all going close for Nigeria, who played without fear and continually pounded forwards.

At the other, Soldado had two good chances to increase Spain's advantage before the break but was twice thwarted by Nigeria keeper Vincent Enyeama.

Cesc Fabregas then held his head in disbelief when he strode on to a cross from Soldado but, with only Enyeama to beat, shot against the post with the rebound flying straight into the goalkeeper's grasp.

It was a different story after halftime with Spain midfielders Andres Iniesta and Xavi typically keeping possesion for long periods.

One of those moves produced a sublime second goal for Torres, who got away from marker Godfrey Oboabona to head in David Silva's perfect cross.

The difference between the sides was best summed up by a woeful miss from Nigerian Gambo Muhammad late in the game when had time and space to fire past Victor Valdes but shot well wide.

Spain completed their win went a quick free kick from deep inside their own half sent Alba galloping clear of the Nigeria defence and he calmly slipped past Enyeama to score into an empty net.