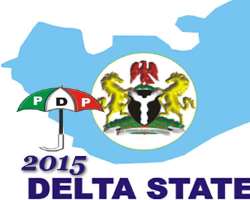 SAN FRANCISCO, June 16, (THEWILL) – The top contenders from the Delta North Senatorial District for the 2015 governorship election in Delta State under the ruling Peoples Democratic Party (PDP) met on Saturday behind closed-doors at the private residence of the Chairman of the party, Chief Peter Nwaoboshi.

THEWILL gathered that the top aspirants were invited by the Chairman to deliberate on issues concerning their aspirations.

The leadership of the party in the state had earlier zoned the governorship to the Delta North Senatorial District.