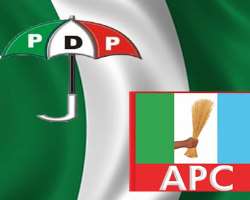 SAN FRANCISCO, June 12, (THEWILL) – The Peoples Democratic Party (PDP) has described the blueprint of the All Progressives Congress (APC) as unfolded on Wednesday at the British House of Commons by the leader of the Action Congress of Nigeria (ACN), Asiwaju Bola Tinubu, as a basket of empty shells.


A statement issued by the National Publicity Secretary of PDP, Chief Olisa Metuh, on Wednesday, said the event was “an attempt to deodorise the stench of inadequacies that have dogged the yet-to-be registered party.”


"It was a let down yesterday as the leader of the ACN, Bola Tinubu stunned an international audience with the emptiness he unveiled as the emancipation package of the APC. It is an agenda grossly lacking in essentials, in fundamentals; deep in cosmetics, devoid of originality, laced with half truths and outright lies and grittily divorced from the substance and incidentals that ginger national growth. It is a basket of promise filled with shells, " Metuh said in the statement.


The party said nothing exposed the un-seriousness of Tinubu's presentation than his loud silence on corruption and the alternative roadmap to the extant security challenges which the opposition coalition has made so much noise about.


" Members of the British Parliament must have giggled and waited in vain for Mr. Tinubu to unveil the much vaunted opposition agenda on anti- terrorism and corruption. Is it that the APC has no answers to these or that Tinubu deliberately skipped them?


"Here, curious minds reflect on two things. The PDP-led Federal Government has applied the master strategy that is already yielding results; thus leaving the opposition bereft of fresh, better dimension as an alternative or that the man who appeared in the British House of Commons is the least qualified to speak on corruption and terrorism before such a self respecting and well meaning assembly with an in-depth grip on happenings in Nigeria,” the statement said.


"Indeed, the leader of the ACN, as we speak, has an unsettled issues of corruption and questionable credentials while it is obvious to all Nigerians that the leaders of the opposition are the chief promoters of insurgency in the country. This voyage of ridicule turned full circle as in Tinibu's entourage was also, the Speaker of the Lagos State House of Assembly, a man currently standing trial for acts of corruption. How then could the delegation have made a presentation on corruption?”


On the issue of National Social Security, the PDP wondered why the states being governed by the opposition party have not been implementing it if it is such a laudable programme knowing that under Nigeria's federalism, the states suffer no restriction over such matters.


" Why is the opposition waiting to get to the centre before implementing this? Why did Tinubu not implement this as Lagos State governor for eight years? Why are the six ACN states over which Tinubu is the overlord not implementing this? Promises are easily made. If Tinubu as Lagos governor denied workers wage increment and denied pensioners the benefits of decades of service, how could the APC government which he canvasses take care of the aged and the vulnerable under the social security programme? Nigerians need eggs no doubt but not their empty shells!


“Similarly, the school feeding programme which the APC paraded as one of its cardinal agenda is in fact a programme under various stages of implementation since it was launched in September 2005 by former President Olusegun Obasanjo. In fact, some of the PDP states have gone beyond meal-a-day to other accompaniments that make learning easy for the Nigerian child," the statement said.


According to PDP, "While Tinubu was in the UK unfolding the opposition agenda on education, teachers in Ogun, an opposition state locked the classrooms and chased school children home in strike over lingering issues of service. In Ekiti and Osun States also under the ACN, strikes have been the order of school curriculum for over a year now. Who then takes the opposition serious?"


"Tinubu's sermon on credible election and the state of democracy in Nigeria flies in the face of consistent knockings of the shenanigans that play out in the opposition states as Local Government elections.

The same international community that Tinubu wanted to convince there is no democracy in Nigeria is the same community that adjudged the 2011 general elections as the most credible in our recent history.


" There is no democracy under PDP, yet, President Goodluck Jonathan in 2012, went to Edo, a competitively PDP state; assured of a credible poll and delivered same. In Ondo, another state under the opposition, where PDP no doubt has deep roots; the President again demonstrated that the history of flawed elections is gone in Nigeria. What then is democracy?


“What then is credible election? Who listens to the hyperactive lies of the Nigerian opposition than those of their hue who already know they don't have the structures and the unity ( already seen in wide division APC leadership slots) to win the 2015 general elections and are therefore fashioning out reasons well ahead of time."


Challenging the opposition party to a debate on the alternative roadmap to what the PDP-led Federal Government is doing at present, the ruling party said ”With an empirical comparison of the pace of development at the centre and the states under the opposition on one hand and these states against those under the PDP on the other, Nigerians are no doubt a better judge of who enjoys their mandate in in 2015."