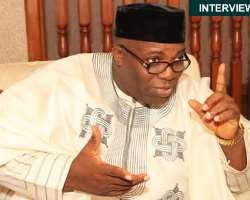 
The Senior Special Assistant to the President on Public Affairs, Dr. Doyin Okupe has debunked the insinuation by the Action Congress of Nigeria, ACN that the freedom of the press is affected along with the proscription of the terrorists' organizations in Nigeria.

In a statement made available to the press on Monday, the presidential aide said actions by the National Publicity Secretary of the party, Alhaji Lai Mohammed and the ACN does not only betray desperation on the part of the party but is equally lacking in sound judgment.

He said, the major concern with the ACN's statement is the misinformation they are giving Nigerians on the stifling of press freedom.

'Neither the intention of the law nor the contents of the order can be interpreted in that direction except by professional mischief makers to mean a suppression of press freedom.

'For the avoidance of doubt, the order is not meant to stop journalists from carrying out their duties or function of news gathering or reporting as they differ from terrorist activities. Rather, the order is out to criminalize acts of incitement by anyone, group of persons or institutions to commit terrorist acts  through dissemination of  terrorist information', he maintained.

According to him, 'what its present action suggests is that were the ACN in power, it would have done nothing to stop the needless destruction of lives and property by the terrorist groups proscribed by the Federal Government.

'Are we to believe then that the ACN is unhappy with present peace and calm enjoyed by residents of the states under emergency rule? Are we to conclude that Alhaji Lai Mohammed and his party are uncomfortable with the fact that following the intervention of our military, that children have returned to school and that markets have reopened for businesses?'

While stating that the latest uproar by the ACN about the order affecting or circumscribing press freedom is a blatant lie, Okupe said such argument is not supported by reason, logic or law.

He wondered why the ACN is suggesting that terror should continue unabated and unchecked just as he pointed out that Section 5 (1), which prescribes a term of imprisonment of not less than 20 years for any person who knowingly, in any manner, directly or indirectly, solicits or renders support for the commission of an act of terrorism or to a terrorist group could not be said to be an attempt to encroach on press freedom.

'If the grouse of the ACN is with the word 'support', we expect Lai Mohammed and his party to clearly understand the difference between reporting activities as news and dissemination of information on behalf of terrorists'.

Okupe said it is quite unfortunate that, the ACN and Lai Mohammed in particular, have tried to misrepresent President Goodluck Jonathan and spread gross misinformation about his policies and actions in the last two years.

'It is only a jaundiced organization with no clear perspective on governance or respect for truth that will state that the only transformation observable is that of transforming from a democratically elected president to an emperor or despot. The declaration is bestial, puerile and irresponsible. Never in the history of this country has a president laid much emphasis on political liberalism than President Jonathan has done', he insisted.

It could be recalled that the ACN, which Lai Mohammed represents has often been described as a tyrannical political institution run by an association of despots and a clearly undemocratic leadership.

The Transformation Agenda of the Jonathan administration as evinced by the mid-term report, according to Okupe is not only unprecedented but also unrivalled by any administration, whether federal, state or local government past or present, in the annals of our nation.

He warned that if the ACN cannot copy it, they should at least have the decency and humility to acknowledge it.