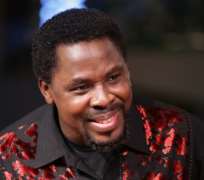 A gang of con artists that specialise in using the name of Prophet TB Joshua in bilking people out of large sums of their hard-earned money was, penultimate Sunday, exposed at The Synagogue Church of All Nations, SCOAN.

One daring and long-running escapade of the crooks came to a dramatic end when their victim, Felix Doye Yabrifa, finally smelt a rat. The Bayelsa State based businessman was reacting to the constant warning broadcast on SCOAN's satellite television channel, Emmanuel TV, alerting viewers to the menace of people and churches who bandy the prophet's name about for dubious purposes. He decided on a fact-finding mission to The Synagogue after repeatedly hearing the warnings.

Four years ago, Yarbifa was in his Bayelsa base when a three-man group led by an old lady arrived, uninvited. They told him they were specifically sent to him by Prophet TB Joshua to perform certain spiritual exercises that would last only three days. On the instruction of the prophet, they said, he (Yabrifa) should take care of them for the period the exercise lasted. “Initially I was reluctant because of the cost implication of taking care of three persons – hotel accommodation, feeding and logistics,” said Yabrifa, “but when the name of Prophet TB Joshua was mentioned, I had no alternative than to accommodate them.”

First, he took them to his home where their initially proposed three-day stay stretched to a whole three weeks. Next, he moved them to a hotel. But a nightmarish four year spell for the hapless businessman was only just beginning. Eventually, well over three million Naira of his cold, hard cash simply went down the drain during the whole ordeal.

Running Low On Cash
It was as if the conmen had put a hex on Yabrifa. Willy-nilly, for eight months, he just continued to do the bidding of these strangers, continuously doling out cash to pay their hotel bills and taking care of their other needs. Then, he began to run low on cash, as his bills ran up.

As a last resort, he settled for a rented four- bedroom apartment into which he moved his uninvited guests. As at when he addressed the congregation at The Synagogue Church of All Nations that Sunday, they were still in the rented apartment in Bayelsa State. Continued Yabrifa, “Each time they talked to me, it was like they put fear in me. So wherever I was, I will just have to bring out the money. Even when I was closing my account, I didn't even know.”

Sacrifice To Marine Spirits
The confident tricksters got even more daring and more diabolical. Their leader, the elderly lady, had Yabrifa believe that she was in constant touch with Pastor Joshua: “She confirmed to me that she was constantly in touch with the man of God and that they communicate in spirit on a daily basis,” narrated the businessman, who also told the congregation of worshippers at the church that the con-artists told him they the primary aim of their visit was to pray for the people of Bayelsa State and then put a stop to a refinery project that was having some financial problems.

Even as he continued to take care of them, they made new demands on Yabrifa and even his France-based business partner who had waded into the matter, to bail his business associate out of his financial mess. From his partner, they demanded for N1million to be paid into their account every month, and from Yabrifa himself, that the sum of N20,000 be given them every week. When his partner heard of the new demands, he protested. On his own part, Yabrifa saw that despite all he was doing, there was no progress for the better, whatsoever. “Besides, they were introducing me to something contrary to what was happening in The Synagogue Church by telling me to provide money to buy items for them to go and sacrifice to marine spirits here and there,“ Yabrifa noted.

Email
From then on, the businessman could no longer fold his arms and swallow what he had condoned for four long years. He had also been hearing the announcements on Emmanuel TV and this heightened his suspicion. He quickly emailed The Synagogue Church to find out the truth: “When I heard the publications and broadcasts on Emmanuel TV, I became very suspicious and decided to write this very email thinking that when I come here today, at least I would know the truth,” said he, brandishing a copy of the email he had written to The Synagogue as he narrated his ordeal to the congregation.

To his greatest amazement, when he arrived at The Synagogue Church that Sunday, he ran into the ringleader of the group, an elderly woman who was fingered by the victim and was quickly picked up by security agents. “Funny enough, this afternoon I saw one of them so I said well, let me put this across to the man of God.” She was brought into the church where Yabrifa narrated his ordeal, then later taken to Kaiama with her victim, where the Emmanuel TV crew videoed all the locations where the fraud allegedly took place, to corroborate Yabrifa's allegations. Finally, Yabrifa and the television crew returned to Lagos with the suspect and the rest of her gang in tow.

Forgiveness and Deliverance
The following Sunday the suspected conmen were brought to The SCOAN. First, a video recording of the previous week's encounter was played back for the congregation, to refresh their memory. The Emmanuel TV's trip to Bayelsa State was also played back for the audience. Then, Yabrifa continued his story from where he stopped. Prophet TB Joshua occasionally interjected, as he spoke, on the recorded video: “The person he is talking about mistakenly entered here today and they grabbed one of them… he (Yabrifa) was already going, during the break. He just moved outside and he saw one. They would not enter the church, they are always hanging around…”

Finally, the prophet, describing the entire saga as irritating, asked that the narration be stopped, midway into the evidence of the second suspect, a tall, well-built, well-turned out middle-aged man that looked more like a respected tribal chief, than a con-artist. He proceeded to administer prayers and deliverance on them, while thanking everyone in the audience, especially Yabrifa and the people of Bayelsa Sate, for forgiving the suspected culprits. “Let us put all this behind us,” he pleaded.

“People of Bayelsa, thank you,” continued the prophet, “forgiveness is our key. Thank you for forgiving her and her group, may God strengthen your desire for Him Hi. I know that if you people did not forgive her, today, the issue would have been a different question. And thank you, my people, people of God, for forgiving her.” The leader of the group, the elderly lady who was first apprehended the previous week had her turn to speak. Looking a bit more remorseful than the previous week when she was first apprehended, her statement was quite simple: “My name is Marina Patrick… all the things wey him (Yabrifa) talk about me is true, I carry him go water… all the things wey him talk about me is true…”

Joshua used the occasion to preach the virtues of forgiveness to his congregation. “When you listen to the confessions, there is nothing we are trying to say than go and forgive those who sin against you. That's all. We are indirectly communicating to you that you too should forgive those who have sinned against you. No matter how big or small, forgive. Leave it for God. God will fight for you. We are only preaching to you the gospel of forgiveness.”

Blackmail
Going down memory lane, Prophet TB Joshua told his congregation that there is nothing he and The SCOAN have not been accused of in the past. He recalled an incident that happened in The Synagogue Church three years ago. A blind man had been healed and his sight restored. As the man began to chant and praise God and give testimony, some people went straight to the man and offered him N1.2million, if he could just deny the miracle he received and declare it was fake. “The man refused the offer of money and had to run away because they wanted to kill him,” said the prophet. “He had to abandon his home because they said they would come at him. There are lots of things like that.”

Meanwhile, during the same Sunday service, a newspaper which reported in its Tuesday May 19, 2009 edition, that a woman and her son disappeared at The Synagogue Church Of All Nations, was displayed side by side the same woman who was reported to have gone missing with her son.