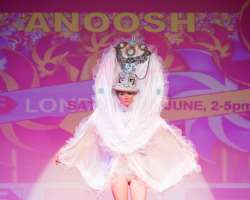 This was part of a number of initiatives by the ENOUGH FOOD FOR EVERYONE IF Campaign that are taking place ahead of the G8 Summit in Enniskillen in Northern Ireland on 17 and 18 June.

“The FASHION AGAINST HUNGER Catwalk Show was a creative and innovative way to raise awareness of world hunger. We utilized creative mediums such as fashion and music that grab and hold the attention of today's young generation and society at large in order to get the message cross”, Said Justina Mutale, CEO and Founder of POSITIVE RUNWAY: Global Catwalk to Stop the Spread, the organizers of the event.

The UK holds the Presidency for the G8 this year and the ENOUGH FOOD FOR EVERYONE IF Campaign would like to ensure that British Prime Minister, David Cameron goes to Northern Ireland equipped with the demands of the IF Campaign for concrete action on tax havens, unfair land deals and support for poor producers.

This exclusive and unique Catwalk Show was organised by POSITIVE RUNWAY in association with Spotlight Fashion Models as part of the ENOUGH FOOD FOR EVERYONE IF Campaign to raise awareness of world hunger.

The exquisite event was produced by POSITIVE RUNWAY's Creative Director, Julius Reuben, who is a top Diaspora male model, stylist and fashion choreographer.

The IF Campaign is a coalition of over 200 UK development organisations and charities who are campaigning and lobbying the UK's Presidency of the G8 Summit for policy change to address world hunger.

A number of initiatives will be taking place ahead of the G8, Summit. On Saturday 8 June, British Prime Minister, David Cameron will host a Hunger Summit in London. This is the start of 10 days of Summits that will culminate at the G8 Meeting in Enniskillen in Northern Ireland on 17 and 18 June.

Members of the African and Asian Diaspora are going to Number 10 Downing Street on Friday 7th June to hand in a letter to the UK Prime Minister. The letter outlines views of the Diaspora organisations on what Mr Cameron should focus on at the upcoming G8 summit in relation to the IF campaign.

Part 2 of the IF Campaign FASHION AGAINST HUNGER Catwalk Show will be featured on the 8th June, thousands will attend the BIG IF rally at Hyde Park to demand concrete action on tax havens, unfair land deals and support for poor producers.

Please visit the IF Campaign website http://enoughfoodif.org/ for further information.

Sign up for the Big IF London event on June 8th here http://bigiflondon-oxfam.eventbrite.co.uk/