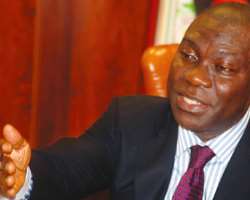 The second review process involved the conduct of public hearings in the country’s six geo-political zones to aggregate the wishes of the citizens and receive memoranda from stakeholders on proposed amendments to the constitution.


It would be recalled that on Monday, Ekweremadu, while speaking at a breakfast meeting with journalists, had disclosed that the report would be ready for submission this week even as he said that the Senate was targeting July to produce a new constitution for the country.

"The Senate constitution review committee has gone a long way. I believe that God willing, by this week, we should be laying on the table the report of the Senate Committee on Constitution Review.

"We are hoping that they (House of Representatives) will be able to move as fast as we are doing. Hopefully, we will be able to achieve our July deadline. Even if we are going to miss it, it will not be too long behind the mark,” he had said.

He also declared that the Senate was not opposed to the creation of new states but advised those clamouring for the creation of additional states to follow due process as stipulated by the Constitution.

"We support creation of states. But you have to follow the procedure laid down by the constitution which most people are trying to avoid. That is our stand . I will like you, the media, to help us explain to the public because it is an issue that will be very controversial," he had said.

Ekweremadu also listed the basic requirements to be met before a state could be created, saying they are more complex than what many people think.

"People think they will come to Abuja and submit memoranda and the National Assembly will deliberate on it and subsequently announce that so and so states have been created.

"Unfortunately, that is not the case. What happens is that you have to receive request pursuant to section 81 of the constitution. I will like all of you to go and read it because it is going to be a major debate by the time we start debate on the amendment of the constitution.

"When we received request, that request must, as a matter of constitutional requirement, have the signature of the two-third of the Local Government council of the affected area requesting for the state. So, that includes the councilors and the chairmen of the council from the area requesting for the state. And you must know these must be elected councilors and chairmen because the constitution did not envisage caretaker chairmen. If it is found out that they are not elected chairmen, that means that they have not fulfilled that obligation.

"Furthermore, there must be signature of the two-third of the state assemblies from those respective areas requesting for a state. Then, there will be two-third signature of the National Assembly. What has happened now is that, our traditional rulers, out of the love for their people, quickly signed the request for creation of state and came to submit it in Abuja without looking at what the constitution says. They are not the one who should be signatories, it has to be parliamentarians.

“But you have to follow the procedure laid down by the constitution which most people are trying to avoid. That is our stand . I will like you to help us explain to the public because it is an issue that will be very controversial,” he explained.