Presidency: Jonathan Has No Plan To Probe Obasanjo's Administration 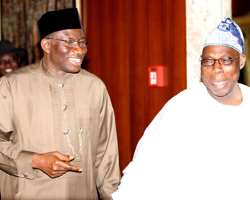 SAN FRANCISCO, June 01, (THEWILL) - The Presidency has stated that President Goodluck Jonathan has no plan whatsoever to probe the administration of for President Olusegun Obasanjo in spite of the current political differences between the two leaders.

Dismissing speculations and rumours of an impending probe of Obasanjo as the product of the fertile imagination of mischievous political jobbers, the Presidency said rather than order a pointless probe of his predecessors, President Jonathan will continue to do his utmost best to build on the solid foundations for national progress laid under previous Peoples Democratic Party (PDP) administrations.

A statement signed by the Special Adviser to the President on Media and Publicity, Dr. Reuben Abati, on Saturday said: “The Presidency is constrained to state once again that there is no truth whatsoever to rehashed reports in the media today that President Goodluck Jonathan intends to order a probe of the Obasanjo Administration because of the former President’s “constant” criticisms of the Federal Government.”

According to the statement, “President Jonathan remains fully focused on the urgent tasks of assuring peace, security and stability across the country to create the right conditions for rapid socio-economic development and will not be distracted from this objective by futile attempts to drive a wedge between him and other respected elders and leaders of his party.”

The statement noted that “The President has nothing but the greatest respect for Chief Obasanjo’s very notable contributions to national growth and development over many years and far from taking offence or seeking retaliation, will always welcome objective criticism and advice from the very highly-regarded elder statesman.”

According to the statement, “What is more, President Jonathan regards his Administration as a continuation of the unbroken chain of PDP-led governments started by Chief Obasanjo in 1999 which have worked tirelessly to entrench democratic governance and achieve rapid socio-economic growth in the country.

“Rather than order a pointless probe of his predecessors, he will continue to do his utmost best to build on the solid foundations for national progress laid under previous PDP administrations.

“Speculations and suggestions of an impending probe of the Obasanjo Administration by President Jonathan are therefore nonsensical and should be dismissed by all right-thinking Nigerians as the product of the fertile imagination of mischievous political jobbers.”