Boko Haram: We Are All Guilty – Gov Kwakwanso 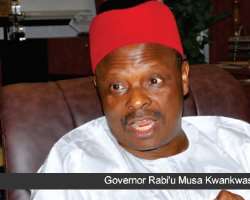 Governor Rabi'u Musa Kwankwaso of Kano state on Monday slammed judgment on the Nigerian government at all level, traditional rulers and religious leaders, blaming them for the Boko Haram insurgency and other security problems facing the country.

The Governor said bad leadership gave rise to injustice which accumulated to bloody agitations by Islamic militants and other terror groups.

Kwankwaso who received members of the Presidential Committee on Dialogue and Peaceful Resolution of security challenges in the North, traced the security problem to failure of the leaders to take full responsibility of governance and offer dividends of democracy to the people.

He also regretted that family values are no longer upheld, 'parents no longer take responsibility of their family. We have a situation in this part of the country where parents give birth to 20 to 30 children, chose only two out of them and send the rest away to God knows where.

'Children are sent to places that they don't know. They are left to fend for themselves. We have a situation where you go round the city and find garrison of children-able-bodied youths begging.

'These children were abandoned by their parents and they were sent away and brought into the state. They grow up to hate themselves, hate their parents, hate the leaders, hate the government and the society. They feel they were deprived, they feel injustice and they become enemies of the state and constituted authorities; and thereby becoming vulnerable to crime and violence.

'These are the bitter pills we must swallow-that we are all guilty of what is happening today. We have to wake up and rise up to the challenges. What started in Yobe and Borno is everywhere in the North, it may eventually envelope the country if we don't check it now. It is a national issue that must be addressed,' Kwankwaso stated.

The Governor who was also a former Defence Minister called on the government and Nigerians to eschew greed and ensure that what is meant for the people goes round.

'We should keep our eyes on what is happening; our leaders must plan properly-long-term planning. We must also do away with the issue of planning for a second-term while the business of governance suffers.

'As a former Defence Minister, I advise that the rule of engagement must be strictly followed by soldiers deployed to those areas we have emergency rule. I appeal to those affected in this insurgency to come to the table and dialogue. We have to reduce the issue of greed, if we cannot eliminate it. We have to ensure that the right thing is done under the worst circumstance. We also have to control our emotion,' Kwankwaso noted.

The chairman of the Committee, Alhaji Kabiru Taminu Turaki commended Governor Kwankwaso for his efforts towards ensuring security of lives and property in the state, even in the face of the insurgency.

He said the Committee was in Kano in furtherance of its nation-wide consultation geared towards initiating dialogue for peaceful resolution of the crises and insurgency facing the country and the North in particular.

He listed the Committee's terms of reference to include constructively engaging Boko Haram members to dialogue and in the process restore peace and stability in the country.

The Committee will also find comprehensive and workable framework that will ensure total disarmament within a period of 60 days.

Turaki noted that in Kano, 'we have seen changes taking place as far as the insurgency and insecurity is concerned. Security has so much improved.

We want to learn from you (Kwankwaso) how you have been able to do this.

'We are satisfied that Kano is well-secured. We also observe that the state government has rebuilt most of the structures that were affected. We thank you for the bold step you have taken to finding the root causes of the insurgency, by empowering the youths. We have seen how you have been making bold steps to creating opportunities to youths to become self-reliant,' Turaki stated.

He also promised that the recommendation of the Committee will touch on serious issues that will put an end to the insurgency, while soliciting for the cooperation of all stakeholders and Nigerians.