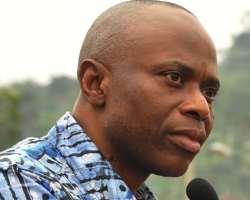 SAN FRANCISCO, May 21, (THEWILL) - Traditional rulers in Owo kingdom of Ondo State have pledged their support for the administration of Governor Olusegun Mimiko in its desire to take the State to an enviable height.

The Olowo of Owo and paramount ruler of the kingdom, Oba Victor Folagbade Olateru-Olagbegi, on Tuesday led other traditional rulers to the Governor's office in Akure to express their solidarity with Governor Olusegun Mimiko's administration...

In his speech, Oba Victor Olateru-Olagbegi said that the visit was to congratulate the Governor on his victory at the election petition tribunal.

The monarch maintained that the monumental infrastructural facilities provided for the people in various communities of the State portray the Governor as a man with a caring heart..

He particularly commended Dr Mimiko for the transformation of the entire Owo community.

While thanking his visitors, Governor Mimiko assured them of more infrastructural development during his second term in office.

He described Owo as the stronghold of progressive politics in the country and sought further collaboration with the people to move the State forward.