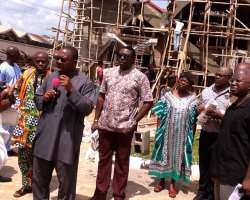 Gov. Peter Obi(with Microphone) and his SSA on Creative Media, Bobmanuel Udokwu with members of Achebe's family during the inspection of Chinua Achebe's final resting place in his compound, Ogidi today
Listen to article

Gov. Obi said that Anambra state is ready to accord Prof. Chinua Achebe a befitting burial and that the Govt would not relent in honoring people like him, both dead or alive, but who contributed positively to the advancement of te society. The Governor said this yesterday during the inspection of St. Philip's Anglican Church, where his burial service will take place on the 24th.

Later in his country home, the Governor inspected his country home and his final resting place which is nearly completed and is designed as a mini museum to house all his works.

Obi who expressed satisfaction with the level of preparations, called on the people of the State, especially Anambra people to emulate people like Achebe rather than despicable characters that are let loose on the State.

Meanwhile, Anambra State Government will partner with the Anglican Diocese of Aguata for the construction of modern Maternity. Gov. Obi disclosed this yesterday at the Second Session of the Third Synod of the Diocese at St. Thomas Anglican Church, Umuchu.

The Maternity, which will cost 30 Million Naira, according to the Governor, is in the spirit of the collaboration between the Church and the Government of Anambra State. Obi said he was encouraged to the deepening of the collaboration because the Church by her nature was more positioned to reach the people in the spirit of love and compassion. He said the basic thing remained the fact that any project executed either through the Government or the Church was for the good of the people.

Speaking at the event, the Anglican Bishop of Aguata and the Archbishop of the Province on the Niger, Most Rev. Christian Efobi thanked the Governor for turning the face of the State through massive work. He commended him for being a man of his words