OMATSEYE'S AND THE LANGUAGE OF MEDIA CHIEF 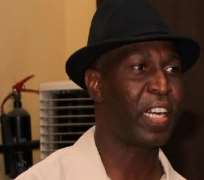 Journalism has always been my delight since childhood. It is one profession that gives one an opportunity to play the role of a referee and a player almost simultaneously. This is perhaps why a famous writer reasoned that the pen is mightier than the sword. The writers’ privilege is however governed by rules of decorum and fairness without which he loses the respect of his readers.

One man who is fast representing this latter mould of a writer is Mr Sam Omatseye of the Nations Newspaper. This sly looking editor of one of Nigeria’s colorful newspaper has unfortunately built a name which conjures an image of a desperate, ill-mannered writer who sees the privilege of the pen as an opportunity to denigrade persons and institutions who do not worship his man-god.

Once seen as an avatar of the Nigerian Media community, Omatseye has regrettably fallen into the mire of some of the worst form of professional compromise driven most probably by his gluttonous quest for material possession. Given his record as a columnist with some of Nigeria’s leading newspapers, the expectations of younger practitioners of this noble profession is that uncle Sam would refuse the urge to catch the bait of Politician Bola Ahmed Tinubu, the former Governor of Lagos state whose rampaging hunger for power and wealth has become a common knowledge to all and sundry. That expectation has unfortunately been dashed not only by the fact that the sanctimonious Sam took on the task of running Tinubus Media machine, but he has so far done so with an alarming recklessness and unethical passion.

Sam Omatseye oozes out stinking and petrifying mouth odour in his quest to run down every real and imaginary enemy of his pay master. A critical appraisal of his weekly Monday column in the last few years will make one wonder what would make an elderly writer loose his common sense and talk more like a baby in desperate need of a mouth guard.It is unthinkable that a man of such years of experience in public communication will suffer incessant verbal diarrhea just to satisfy the cravings of some politician. That seems to me a very tragic descent.

Not many of us will forget in a hurry how columnist Sam Omatseye stoked a major controversy when he wrote and published an article desecrating the name, family and legacies of the late Chief Obafemi Awolowo;a man whose legendary integrity and public service record would probably not be rivaled in ages to come. Omotseyes grudge with the Awolowos was that they would not yield the Tribune stable to further the ignoble political agenda of Mr Tinubu, neither would they subsume the time tested ideology of the late sage to the purchasing prowess of the Lagos politician. Sam Omatseye literally threw caution to the wind by attacking the nonegarian matriarch of the Awolowo family, Yeye HID Awolowo. That article instantly gave omatseye away as a man who had joined the league of political trumpeters whose motivation is anything but professionalism. The volume of responses in reaction to the writers diatribe against Chief Awolowo and the mass indignation of the Yoruba people must have shown Omatseye’s pay master that there was indeed something money could not buy in the market of public opinion.

Since the anti-Awo article exposed the decadence in Omatseyes new ideological leaning, he has not stopped falling down the cliff in the court of public opinion. Only recently, the Nations Editorial Board Chairman threw his hat into the political ring in Ondo state when he used his privileged position to attack the person of Governor Olusegun Mimiko in the run off to the last governorship elections .While Tinubu and other chieftains of the Action Congress on Nigeria mounted the soap box to abuse and curse Mimiko in Akure and other parts of the Sunshine state ,Sam Omatseye amplified his masters voice and called the Ondo state helmsman an “ingrate” “serial betrayer” and “political misfit” ostensibly for refusing to let the Lagos emperor dip his hands into the oil rich treasure of Ondo state.The question which readily came to one’s mind was whether a man of Sam Omatseyes status and pedigree would join a chorus in the immoral claim by Tinubu that he expected Mimiko to compensate him for the monies he allegedly spent on the judicial process that brought the governor into office! Thank God for the vigilance of the Ondo electorate who threw both the dog and its handlers overboard in the election which saw Tinubus candidate coming a distant third!

But if some of us are surprised at the rapid degeneration of the columnist,not so with a colleague who had been following the moves of Omatseye in the last couple of years.A few months ago,according to this colleague,Sam was a guest of one of the governors elected on the platform of the Action Congress of Nigeria in the South West. His mission was to negotiate a Public Relations deal for a private company which he promotes. The governor who was obviously displeased by the colossal sum being demanded by Omatseye was said to have kept the editor waiting for more than ten hours on the pretext that he (the governor) was busy.The eye witness account said it was a sorry sight seeing an award winning editor dozing off on the sofa in a state governors waiting room in anticipation of some crumbs from his excellencies tables! It probably took a phone call from ‘higher’ quarters to facilitate the editors eventual meeting with the state governor. The outcome of that meeting and similar other ones can be seen in Mr Omatseyes overtly patronizing write ups on the ‘performance’ of some state governors in recent times.

When a man who is expected to serve as the conscience of the people suddenly turns himself to governors megaphone, then one begins to wonder if there is any more virtue left in the top echelon of the fourth estate of the realm.

Isn’t it disgusting that a man who is supposed to be an objective analyst an arbiter has suddenly joined the fight between a serving governor and a minister? I mean on what basis would Omatseyes recent outburst against the Minister of Niger Delta and open support for the Rivers State governor on the issues of the East –West Road be justified? The article in question lacked all ingredients of journalistic balancing and ethics.The choice of language was foul and one would only leave with an impression that the real motive of the writer was to do a hatchet job. Now, that is clearly an unfortunate descent for an Omatseye who has allowed a quest for a pot of porridge rob him of a hallowed place in the journalistic hall of fame.It is a big descent and one for which all men of conscience must speak out.