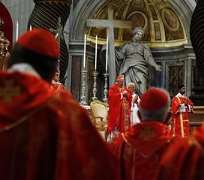 Red-robed cardinals retreated behind the heavy wooden doors of the Sistine Chapel on Tuesday at the start of a conclave that will elect a new pope to tackle the strife and scandal rocking the Roman Catholic Church.

Latin chants and organ music accompanied the cardinals as they processed into the room, with Michelangelo's depiction of Christ delivering the Last Judgment on the back wall and his image of the hand of God giving life to Adam on the ceiling.

Laying their own hands on the Gospels and speaking in Latin, they took a vow of secrecy not to divulge anything about the ballot, which was expected to start with an initial round of voting later in the afternoon.

No conclave in the modern era has chosen a pope on the first day, and some cardinals speculated earlier this week that it might take up to four or five days to pick the man to replace Pope Benedict, who unexpectedly abdicated last month.

The doors were shut at 5.34 p.m.(12.34 p.m. ET), and the master of ceremonies, Guido Marini, said "Extra Omnes" (Latin for "Everyone Out"), asking all those not associated with the gathering to leave the room, dominated by Michelangelo's 16th century fresco masterpieces.

Maltese Cardinal Prosper Grech, who at 87 is too old to participate, remained inside to give a sermon to remind the 115 cardinal electors of the gravity of their responsibility, before he and Marini were to be the last outsiders to leave.

Smoke from a chimney on the chapel roof will announce the outcome to the outside world. Black smoke means an inconclusive vote and white smoke signals the election of a pontiff.

The average length of the last nine conclaves was just over three days and none went on for more than five.

Earlier, on a day rich in ritual and pageantry, Italian cardinal Angelo Sodano called for unity in the Church, which is beset by sex abuse scandals, bureaucratic infighting, financial difficulties and the rise of secularism.

"My brothers, let us pray that the Lord will grant us a pontiff who will embrace this noble mission with a generous heart," Sodano said in his homily at a Mass in St. Peter's Basilica ahead of the conclave.

POSSIBLE PONTIFFS
No obvious front runner has emerged since Benedict's departure, with some prelates calling for a strong manager to control the much criticized Vatican bureaucracy, while others want a powerful pastor to promote their faith across the globe.

Italy's Angelo Scola and Brazil's Odilo Scherer are spoken of as possible front runners. The former would return the papacy to Italy after 35 years in the hands of Poland's John Paul II and the German Benedict; Scherer would be the first non-European pope since Syrian-born Gregory III in the 8th century.

However, a host of other candidates from numerous nations have also been mentioned as "papabili" - potential popes - including U.S. cardinals Timothy Dolan and Sean O'Malley, Canada's Marc Ouellet and Argentina's Leonardo Sandri.

"He must be a great pastor with a big heart, and also have the capacity to confront the Church's problems, which are very great," said Maria Dasdores Paz, a Brazilian nun who attended the Mass in Rome. "Every day there seem to be more."

In the past month, the only British cardinal elector excused himself from the conclave and apologized for sexual misconduct.

Signaling the divisions in Catholic ranks, Italian newspapers reported on Tuesday an open clash between prelates in a pre-conclave meeting on Monday.

Aviz retorted to loud applause that the chatter was coming from the Curia, the Vatican's central administration, which has been criticized for failing to prevent a string of mishaps, including leaks, during Benedict's troubled, eight-year reign.

All the prelates in the Sistine Chapel were appointed by either Benedict XVI or John Paul II, and the next pontiff will almost certainly pursue their fierce defense of traditional moral teachings.

But Benedict and John Paul were criticized for failing to reform the Curia, and some churchmen believe the next pope must be a good chief executive or at least put a robust management team in place under him.

Vatican insiders say Scola, who has managed two big Italian dioceses without being part of the central Vatican administration, could be well placed to understand its Byzantine politics and introduce swift reform.

The still influential Curia is said by the same insiders to back Scherer, who worked in the Vatican's Congregation for Bishops for seven years before later leading Brazil's Sao Paolo diocese - the largest in a country with the biggest national Catholic community.

With only 24 percent of Catholics living in Europe, pressure is growing to choose a pontiff from elsewhere in the world who would bring a different perspective.

Latin American cardinals might worry more about poverty and the rise of evangelical churches than questions of materialism and sexual abuse that dominate in the West, while the growth of Islam is a major concern for the Church in Africa and Asia.

The cardinals will retire to a Vatican guesthouse for the night before returning if necessary to the Sistine Chapel on Wednesday, where they will vote four times a day until they choose the man they believe to be the vicar of Christ on earth.

As in mediaeval times, the cardinals will be banned from communicating with the outside world. The Vatican has taken high-tech measures to ensure secrecy in the 21st century, including electronic jamming devices to prevent eavesdropping.