MOVIE WITH FOUR FRIENDS OR DIGNITY FOR FOUR WOMEN IN 'THOSE DAYS'? 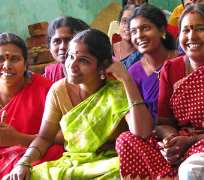 Do you have US$ 24 or Indian Rupees 1,000 to spare? Now the choice is yours how you would like to spend the money: buy movie tickets and enjoy with friends or sponsor four women for a year to help protect their dignity? With this money these women would get the supply of sanitary napkins for a year. Till 5-6 years back menstruation was a tabooed topic in the Indian society. Activists avoided discussions on this integral part of a woman’s life. Even women felt embarrassed to talk about this biological cycle. The situation was despite the fact that the focal point for all schemes of social uplift always remained women–be it micro finance, self help groups or corporate social responsibility.

In those circumstances Goonj initiated a dialogue and brought this darkest feminine secret to the forefront. The basic issue of clothing remains in the epicentre of its operations. The organisation is working with women and children in the urban slums and rural areas of more than half a dozen Indian states, like Andhra Pradesh, Bihar, Chhatisgarh, Delhi, Jharkhand and Madhya Pradesh.

The dialogue has certainly changed the situation. The television channels are full of advertisement for a variety of sanitary napkins. Also, instead of showing married women in these advertisements as the case was a few years back, today young school/college going girls are shown talking about safety and hygiene during menstruation. Yet a lot is left to be desired.

A national survey conducted this year by organisations AC Nielsen and Plan India has found that the population of women and girls menstruating in India is nearly 355 million. But, less than 12 per cent of them are using sanitary napkins. Majority of other women do not have access to sanitary napkins and do not have proper knowledge about menstruation either.

The study also revealed that ignorance of the issue and lack of means is forcing more than 300 million women and girls to use unhygienic and unfathomable materials, such as old rags, husk, dried leaves, grass, ash, sand or newspaper, to soak the blood flow during period.

If at all they use cloth, it is the dirtiest one, which is reused without proper washing and drying in the sun. Again because of embarrassment women cannot wash these pieces of cloth in the public washing places and cannot put them out to dry in the sun. These cloth pieces are dried mostly hidden in a corner where they not only remain damp but also catch many bacteria as well.

These unhygienic measures make women susceptible to infections and diseases infections of urinary tract and reproductive system. Lack of hygienic practices and sanitation facilities also lead to over 20 per cent adolescent girls dropping out of schools after attaining puberty.

Woman sponsored by Goonj gets a bag containing 60 sanitary napkins (five for each month as they can be washed and reused), a small cloth pouch for keeping the napkins, a soap and a panty. Although this may not sound sufficient to many women, who already have access to hygienic solutions to manage their periods, for women living in slums and rural areas these are not just pieces of cloth but means to healthy and dignified life.

“Under our different programmes we collect old and discarded clothes from corporate houses, organisations and individuals. The pieces in good condition are given as reward to men and women against their contribution in the form of community work and to children for their behaviour change”, Anshu Gupta, the founder director of Goonj details the work.

“There is a part of our collection that cannot be used for anything. This lot is washed and dried in the sun for making sanitary napkins. Nearly 200,000 napkins are produced every month with this otherwise useless cloth”, adds Gupta.

Even the Government of India has announced a plan to provide 200 million rural women with subsidised sanitary napkins at Rupees 2 each. However, the scheme is drawing criticism as the government does not have a plan to involve rural women in the manufacturing. There is no strategy for raising awareness either, which is the key to success for any such scheme.

On the other hand Goonj has developed an exhibition on the issue which travels from village to village for raising awareness. Besides, the manufacturing work is also given to women living in rural areas or urban slums after extensive training in how to make napkins. Thus, a livelihood activity is also generated.

Some of these ingenious napkins and the awareness programmes recently got a display during the Nirmal Bharat Abhiyan (Clean India Campaign), focus of which was on menstrual hygiene.

The Campaign started in the form of a Great WASH Yatra (journey) from Wardha in Maharashtra on October 3, last year. Covering six districts in five states including Maharashtra, Madhya Pradesh, Rajasthan, Uttar Pradesh and Bihar, the month-long Yatra culminated in Bettiah in Bihar on World Toilet Day, which is November 19. The event targeted to reach out largely to students considering the fact they are the most powerful messengers of change in the society.

Each day of the event more than 5,000 students, mostly adolescent girls, attended the WASH (Water Sanitation Hygiene) Fair which was organised during the Campaign in each district.

“We are committed to bring menstruation, a subject rarely talked about, in the open. During the WASH Yatra we took the opportunity to talk with girls and their parents, siblings, teachers and colleagues. The aim was to break the silence and talk about menstruation without shame and embarrassment and find easy and feasible solutions collectively”, said Archana Patkar, Programme Manager, WSSCC (Water Supply and Sanitation Collaborative Council), which was a partner in the Yatra, to Citizen News Service – CNS.

Goonj, a voluntary organisation has exhorted people to sponsor year-long health and dignity to women, the cost for which is more or less the same as that of movie tickets these days. Over 50,000 people have already come forward in last couple of months. (CNS)