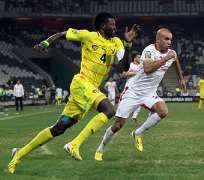 Two months after threatening to miss the African Cup of Nations over a dispute with Togo's football federation, striker Emmanuel Adebayor has his sights on winning the tournament.

Having settled his differences with the federation over security arrangements and bonuses for the African Cup, Adebayor has played a key role in taking Togo to its first quarterfinal at a major tournament.

Adebayor scored the opener in Togo's 2-0 victory over Algeria at the weekend, then set up the goal that ultimately earned Togo a 1-1 draw with Tunisia on Wednesday and sealed its progression to the next round.

"I'm very proud of my country, of what we have been through," Adebayor said. "Today I'm here and I'm very happy - I'm part of the history."