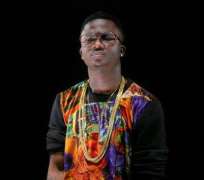 Determined to drop a music video that would effectively convey his brand of music as well as its inherent message and thematic focus, Nigeria's up and coming singer, Yung Brown has released a new music video, which he titled 'Love Sampelele.'

This video comes with a whole lot of elements depending on the perspective from which it is viewed but two things are consistent with this one - It has melody and it's one capable of getting you shuffling your feet to it's rhythm and tempo.

Twenty Three year old Yung Brown (Frank Onyiriuka) grew up in one of Lagos State's most notorious areas, Satellite Town. Despite Yung Brown's humble beginnings, he always had the dream that someday, he music would bring him fame and recognition. He built a name for himself locally by doing incredible freestyle and promoting himself on Alaba Mix-tapes.

His first single became the hooky 'Love Sampelele' on club rotations and the song was produced by Dapiano. As the club track continued to gain street credibility, Yung Brown had to shoot a video for the song. The resulting video was eventually directed by Patrick Elis.