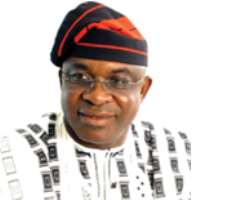 Nigerians are getting worried by the day over the greedy/defiant nature of President Umaru Yar'Adua to hand over officially to his Deputy (Goodluck Jonathan) despite the fact that the duo got to power on a joint ticket from the same political party. Yar'Adua for two months now has remained incapacitated to continue as President owing to his ill heath, and he his reported to be receiving treatment in an unknown location (Jeddah or Yemen). This bizarre development and sheer constitutional breach has been generating a lot of squabbles among Senators, even as a group in the Senate sketches recourse to Section 145 of the Constitution following the absence of President Umaru Yar'Adua. Sixty Senators warn that impeachment is on the cards, against the objection of the Peoples Democratic Party (PDP), which insists that there are no plans to replace Yar'Adua and also against the wishes of Senate President David Mark who maintains that Yar'Adua has not breached the Constitution.

Sixty Senators who have signed a petition said they are dissatisfied with the outcome of the motion that sought a debate on Yar'Adua's health last Tuesday. Sources confirmed to huhuonline.com at the weekend that the Senators, whose membership cuts across the six geo-political zones, plan to table a new motion that would compel Vice President Goodluck Jonathan to perform the duties of Yar'Adua until he is fit to return to his seat.


Last week, the Chamber debated a motion sponsored by Deputy Senate President, Ike Ekweremadu, and 30 others seeking to send a delegation to Saudi Arabia to ascertain the state of health of Yar'Adua. But the motion was later watered down as the Senate only resolved to summon the Secretary to the Government of the Federation (SGF), Yayale Ahmed, to brief lawmakers. Although the motion raised concern that there is no formal communication from Yar'Adua in line with Section 145 of the Constitution which will empower Jonathan to act as President, it drifted from tackling any constitutional matter.

However, sources in the National Assembly (NASS) said dissatisfied Senators have resolved to re-launch the motion, which would require a two-thirds majority.A source close to the angry lawmakers said they have collated 60 signatures of those who want the motion revisited:

“It will be a mass movement in the Upper Chamber and I assure you that we have the needed two thirds majorities to do that.“This movement cuts across all geo-political zones and all classes of Senators. It is not a question of opposition or majority Senator, what we are after is the peace and orderly governance of our country,” one Senator explained.

The first bid, according to him, is to resuscitate the motion and empower it with a clear recommendation that Jonathan be made to act as President until the return of Yar'Adua, who has been hospitalized in Saudi Arabia since November 23 last year.The source said if the Senators meet with resistance, they may be forced to list impeachable offences against Yar'Adua, especially his failure to comply with Section 145 of the Constitution:

“As we are talking now, 60 Senators have signed for the motion, they are from all geo-political zones, and the catch is that (Jonathan) must be seen to be running the affairs of this country as acting President, unlike the current situation where some appointed persons are exercising the powers of the President.


“If they don't allow him to take power, we will have no other alternative but to pursue impeachment proceedings against (Yar'Adua).


“We have observed that the nation is still backward because of the type of warped thinking that prevented (Yar'Adua) from communicating the National Assembly on his vacation.


“Despite our 10 years into democracy, many Nigerians still find it difficult to feed themselves.


“What is right is right, even if the Constitution does not expressly state it, common sense provides that if the President is not around, his Deputy should act. That is the appropriate thing.


“We are going to table the motion again, I won't tell you the exact date but if we are prevented, I hope it will not be the issue that would rock this Senate.“All categories of Senators have signed, including the former Governors among us; all the experienced, the old and the young Senators. We have the two thirds needed to move the motion and we are ready.”

Despite the mounting unease in the polity, however, David Mark (Senate President) stood his ground, this time in Lagos, where he argued that Yar'Adua has not breached Constitution by being absent from office. He told reporters at the Murtala Mohammed Airport on recently that civil service rules cannot be superior to the Constitution and Yar'Adua cannot be judged by the civil service. He said he did not stop any Senator from presenting a motion on the health of Yar'Adua on January 12, but explained that anyone could be ruled out at the point of order. His words:

''The civil service rule is quite different from the Constitution and, so far, (Yar'Adua) has not breached the Constitution with his absence.“Did you listen to our resolution? Is there anything wrong with us finding out? If there are so many options, we have taken a different option. Why must we take the same option like others? Is sending a delegation to Saudi Arabia the only option available to us?”

In its own reaction the PDP urged those expecting Yar'Adua to be replaced to perish the thought. It dismissed as false, reports of division in its ranks caused by the struggle by interest groups out to grab the Vice Presidential slot should the party abandon Yar'Adua.


PDP National Publicity Secretary, Ahmed Rufai Alkali, issued a statement on Sunday in which he blamed the opposition for the reports, noting that political adversaries are only trying to use the media to sow a seed of discord in the PDP.


He insisted that the party's decision to stand by Yar'Adua, no matter the number of days he spends outside the shores of the country seeking medical attention, remains unshaken, because Yar'Adua's absence has not created a vacuum in the Presidency.Alkali said Jonathan has done well in handling the business of governance and will continue to receive the party's support while prayer continues for quick recovery of Yar'Adua.

He stressed that, “The PDP has remained united and focused in praying for the quick recovery of (Yar'Adua) who has personally spoken to the Nigerian people on his state of recovery.

“We therefore view stories purporting a division within the party on the basis of any succession arguments as unnecessary distractions, and also as attempts to break the cohesion that currently prevails in the party.”He vowed that, this ploy, “just like many before it,” will fail because the PDP leadership is determined to protect and preserve the institution of the Presidency which has remained “stable under the able direction” of Jonathan.