APGA Accuses Ihedioha, Uzodinma, Others Of Plot To Destabilize Okorocha 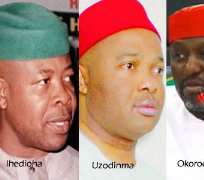 In a statement signed by APGA's state chairman, Prince Marshal Okoroafor-Anyanwu, the party blames the PDP chieftains and the monarch for masterminding the recent arrest of the state commissioner for Finance, Deacon Chike Okafor and the Accountant General, George Eche, by the Economic and Financial Crimes Commission (EFCC).

APGA maintained that the two officials were arrested over unfounded allegations to discredit the state government.

According to the party, the quartet are still boasting and claiming that they have the support of Mr. President to impeach Okorocha. 'They are claiming to have set aside N3billion out f which they would disburse N100million each of the 27 members of the state legislature to facilitate the removal of the state governor,' the party alleged.

It advised the quartet to appreciate the achievements of the governor rather than undermining him, stressing that the good people of the state would resist their evil plans.

The party further lamented that the refusal of the EFCC to arrest former governor, Chief Ikedi Ohakim even when available information revealed that he obtained a loan at government expense to prosecute his failed re-election bid.

Responding to the allegations of plot to destabilize Okorocha's government, Ihedioha , in a statement signed by his media aide, Mr. chibuike Onyeukwu,  denied having anything to do with the arrest of the two officials. He further stated that he would not allow himself to be distracted from discharging his duties and described APGA's allegations as false and untenable.

On his own, Eze Ilomuanya, who spoke through is Chief Press Secretary, Mr. Kennedy Eweama, also denied masterminding the arrest  of the two officials and stated that party's allegations lacked facts and coherence.