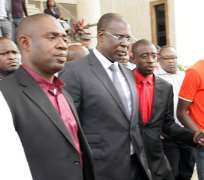 SAN FRANCISCO, January 15, (THEWILL) - There appears to be no reprieve yet for the embattled former Bayelsa State governor, Timipriye Sylva, as a Federal High Court in Abuja, Tuesday, renewed its order for the seizure of his properties.

The court also extended the order to January 24 apparently to enable the Economic and Financial Crimes Commission (EFCC) take full possession of the properties and prevent Sylva from disposing the properties.

EFCC prosecutor, Mr. Festus Keyamo, had made a case for the extension of the order, which the court granted, when hearing resumed on the two cases against Sylva, arguing that the properties would be difficult to possess if the embattled former governor was eventually found guilty of the alleged financial crimes for which he is being tried at the other court.

Raising an objection however, Sylva's counsel, Mr. Benson Ibezim, opposed Keyamo's prayers, arguing that the court made the order in error in the first instance and upon a suppression of fact by the anti- graft agency.

Ibezim said he had filed a motion challenging the competency of the suit.

Ruling on the matter, the trial judge, R. A. Mohammed, noted that it was on the basis of that temporary confiscation order that they were all before the court and observed that without the order, the application brought by Sylva challenging the competence of the suit would not be heard.

The court therefore agreed to extend the life of the order till Janaury 24 and directed Keyamo to put Sylva's lawyers on notice for them to make contribution to the application for the extension of the order as well to hear all the pending applications.

In a related development, another federal high court will on February 20 decide on whether or not to quash the six- count charge of fraud and criminal conversion of over N2billion filed against Sylva by EFCC.

Justice Adamu Bello gave the date after hearing arguments made in support of the application by Sylva to quash the charges against him by his lawyer, Mr.Lateef Fagbemi.

Sylva is challenging the competence of the charge and the fact that the proof of evidence did not establish any prima facie case against him.

Fagbemi, who urged the court to throw out the case since the charges constituted an abuse of court process, cited relevant legal authorities to support his position.

According to Fagbemi,who urged the court to dismiss the charge, the charge and the proof of evidence filed by the anti-graft agency was defective and thus an abuse of the court's process.

On his part, EFCC prosecutor, Keyamo, opposed the application to quash the charges. He asked the court to discountenance Fagbemi's argument, arguing that the purpose of a proof of evidence was to provide a general information about a crime that one had been alleged to have committed and did not preclude the prosecution from bringing further evidence in the course of the trial.

He said that all the prosecution was asking for was to be allowed, through trial, to show that the former governor committed the crime which the anti-graft agency accused him of.

Refering to the cases of another former governor of the state, Mr. DSP Alamiesiegha, and that of former chairman of the Nigerian Ports Authority, NPA, Olabode George, both of whom were convicted on charges brought against them by the EFCC, Keyamo faulted Sylva's position that the alleged crimes were committed by his commissioners and not him personally.

He pointed out that statements of a former commissioner of finance in the state while Sylva was the governor of the state, one Dr. Sylva Opuala, as well as that of the then Accountant General of the state, Mr. Francis Okokuro, both of whom were standing trial on criminal charges at another court, revealed that they carried out the alleged fraudulent financial transactions under the instructions of the former governor.

Keyamo therefore told the court that the interest of justice would best be served if the prosecution is allowed to lead evidence in proof of the charges in the course of trial.

Sylva is standing trial before the court on a six-count charge over an alleged N2 billion loan secured by the state under his tenure from Union Bank of Nigeria Plc purportedly for the augmentation of the salaries of the state's civil servants.

He was alleged to have connived with some of his commissioners and state officials to convert the said sum into foreign currencies and frittered away.

Sylva, who had pleaded not guilty to the charges, had been granted bail.