THE ROT IN POLICE COMMISSION 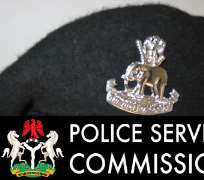 Officially, the police service commission of Nigeria is said to be the civilian oversight body established under the Nigerian constitution for the Nigerian police force. It has power to appoint, promote, discipline and dismiss all officers of the Nigeria police force (NPF) except the inspector general of police (IGP).

Information obtained from the website of the police service commission says that the objectives of the body are to make the relationship between the public and the police one of trust and confidence instead of suspicion and indifference. It further stated that the commission recognizes the public as essential to ensuring an effective police. The commission is said to have a charter, which is addressed to the Nigeria Police, Civil Servants, Non-Governmental organization, Security Agencies and the general public. It was established as an executive body for the Federation of Nigeria under section 153 of the Constitution of the Federal Republic of Nigeria of 1999, and the Police Service Commission(Establishment) Act of 2001.

Currently the commission is headed by Mr. Parry Benjamin Osemwegie Osayande, who retired from the Nigeria Police Force as a Deputy Inspector General of Police. From the profile of the chairman published online by the official website, facts were stated to show that he is indeed a profoundly educated Nigerian.

There is little doubt that the police Service Commission was established to breathe some fresh air into the near-comatose Nigeria police Force that is replete with divergent but overwhelming evidence of corruption, indiscipline and lack of professionalism.

But has the commission delivered on their core mandate which is to create an atmosphere of trust and confidence in the minds of Nigerians on the credibility, integrity and professional excellence of the Nigeria Police Force?

Try, as any die-hard propagandist would like discernible Nigerians to believe to the contrary, most members of the general public are bitter that the current Nigeria Police Force and their operatives have largely failed to deliver on their core constitutional mandate which is the enforcement of the Rule of law and the maintenance of law and order.

Going by the plethora of proven allegations of inefficiency, corruption, abuse of power and the near-total collapse of the mechanism of law enforcement in Nigeria, it is the opinion of the majority of Nigerians that the police service commission is yet to deliver on this critical mandate. In the recent time, there were accusations from a cross section of aggrieved police operatives that the commission has failed consistently to follow merit, competence and seniority as the fundamental bedrock of determining who gets promoted but has rather promoted most beneficiaries based on primordial and pedestrian sentiments.

As an organization that champions the issues around the human rights of Nigerians, Human Rights Writers Association of Nigeria is not satisfied with the disciplinary role being played by the police service commission to ensure that indiscipline of all dimensions are confronted and minimized in the institution of the Police Force which constitutionally is the government agency that ought to have the closest proximity to members of the public.

Extra-legal execution of suspects in police detention centers across the country is a common place which has seriously dented the image of the police and these cases of extra-judicial killings have brought international opprobrium against Nigeria from respected International Non –Governmental organizations like Amnesty International and Human Rights Watch of the USA and UK respectively.

The Police Service Commission seems to be engaged in ferocious turf war with other important agencies of government like the Federal Ministry of Police Affairs that is administratively charged with representing the collective interest of the Nigeria police before the Executive Council of the Federation.

The other day in the full glare of the international community through the electronic media, the chairman of the Police Service Commission during a presentation of the reports of the presidential panel on police Reforms asked that the Federal Ministry of Police Affairs be scrapped.

This statement was made in the presence of the serving police Affairs minister who is also a member of the presidential panel on police Reforms.

These local political bickering, intrigues and turf war is none of our business in the civil society community but we are worried that government officials charged with strategic duty of driving the process of achieving efficient national policing objectives are rather engaging in open confrontation even while the Nigeria Police Force as an institution has almost collapsed.

Few days back our officials got series of complaints bordering on alleged violations of extant statutes meant to promote the highest professional ethical standards, transparency and accountability.

It is a notorious fact that most serving police officers lobby intensely for promotions which may result in compromise.

How then can an officer under the direct disciplinary control of the police service commission be seen to be investigating someone or persons clothed with supposed statutory functions over him/her? How independent and impartial can any investigation commenced against members and/or chairman of the police commission by both anti-graft agencies be, given that the obvious lapses inherent in the establishment Act of the Police Service Commission which rightly or wrongly gives overwhelming powers to the police commission?

So when these complaints and allegations were brought to our attention with some photocopies of purported and/or alleged payment running to several millions allegedly authorized by the chairman, we decided to turn all of these in to the offices of the National Security Adviser to the President, the secretary to the Government of the Federation and the leadership of the Federal House of Representatives to use their executive and legislative might to uncover the veracity or otherwise of these allegations with a view to determining if any alleged abuse of power/office and if any law prohibiting acts of corruption or lack of accountability can be established.

Section 15(5) of the constitution states clearly that; “The state shall abolish all corrupt practices and abuse of power”.