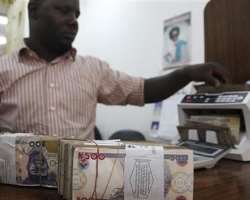 In a country where access to formal credit is 2 percent, and loan account ratio is 15 per 1000 people, how then do we reduce the alarming rate of youth unemployment and poverty in the country? The Malaysian loan account ratio is 963 per 1000. The same World Bank report says: “Financial inclusion or being banked can be transformative, as it allows poor people to build a more secure future. The ability to save and borrow allows them to build their assets, start a business, invest in education, establish a credit rating, and eventually own a home”. How can the unbanked Nigerians achieve all this? Even among the bankable adults, how can they

actualize their dreams of starting a business and owning a home when the lending rate is five times higher than the interest rate that banks pays? Though it varies from bank to banks! On the global stage, 61 percent of account holders use it to receive payment from their employers. However, with the new banking policy directed to commercial banks by the Central Bank on the minimum interest rate of 3 percent for savings account and the maximum lending rate of 20 percent should be monitored by the apex bank! Before the new policy, the highest interest rate was 3.5 percent which only a commercial bank pays! The rest was between 1 percent and 2.5 percent, except 3 banks that pays between 3 percent and 3.25 percent.

Financial Inclusion should be viewed as a right which every Nigerian should be part of! It should be seen as another American styled Universal Health Insurance for all Nigerians. Policies requiring certain items like the National Identity Cards should be relaxed, because it was not every Nigerian that got their Identity Cards when the last exercise was conducted nation wide! Besides, when the exercise was conducted in 2003, some of the adults today were not up to 18 years, and these people must use bank accounts or services.

Nevertheless, the Central Bank should discourage situations where loans are not granted to the real people in the real sector of our economy, with the real intension of creating jobs for the unemployed persons in the land, because, giving loans to those who finance their

greeds, instead of adding values to our economy and boosting the revenue base of the nation through the tax they would pay to the government is tantamount to committing economic suicide.